Shooter sues state over his removal from Arizona House of Representatives 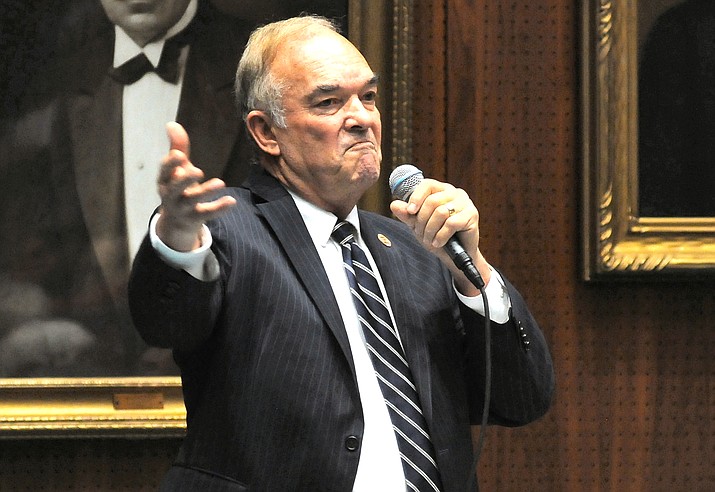 Rep. Don Shooter decries the move to oust him from the House last year over sexual harassment charges. It didn't keep colleagues from voting to expel him. (Capitol Media Services file photo by Howard Fischer)

In a 41-page lawsuit filed in Maricopa County Superior Court, Shooter cited what he said are a series of actions taken not just by J.D. Mesnard, at the time the speaker of the House, but also Kirk Adams who was chief of staff to Gov. Doug Ducey. In essence, Shooter said they all were involved in a conspiracy to silence him for trying to use his position as chair of the House Appropriations Committee to investigate contracts that were being awarded without seeking bids.

But the heart of the complaint filed on his behalf by former Attorney General Tom Horne is that Shooter was denied his due process in the way he was investigated and eventually voted out of the House.

He said the complaints against him by Rep. Michelle Ugenti-Rita, R-Scottsdale and others should have been referred to the Ethics Committee or other special panel, saying that has been the process since the state was formed. In that format Shooter would have had opportunity to present his own evidence and have his counsel question witnesses against him.

Instead, he said, Mesnard farmed out the issue to a committee of House staffers who, in turn, hired outside attorneys to investigate.

Shooter also said his due process rights were violated because his ouster was based on his having violated a "zero tolerance'' standard for sexual harassment, a policy that did not exist at the time he was investigated and at the time when colleagues voted 56-3 to eject him from the House. And he charged that Mesnard had the independent investigators he hired to "omit material and exculpatory testimony and evidence,'' including allegations against Ugenti-Rita.

The House voted last Feb. 1 to expel Shooter after an investigative report found there was "credible evidence'' Shooter had sexually harassed other lawmakers, lobbyists and others. Only Reps. Noel Campbell and David Stringer, both Republicans from Prescott, voted with Shooter against the move, saying a censure would have been more appropriate.

In the lawsuit, Horne concedes that the expulsion vote was not a judicial proceeding which is subject to certain set rules and protections. But he said that Shooter had a "property right'' in his seat in the House, to which he was elected, and cannot be deprived of that without giving him due process.

Aside from the failure to have his case handled by the Ethics Committee, Horne said Shooter said he should have been provided access to the complete investigative file, including the investigators' notes describing the testimony of witnesses "so that he could properly amount a defense to the allegations raised against him.''

"He should, at the very least, have had timely access to the information in order to question the bias, interest, and motive of his accusers,'' the lawsuit states. And Horne also contends that Shooter was libeled throughout the process.

Mesnard has since moved to the House. Contacted about the lawsuit, he repeated his statement that neither he nor the House did anything wrong, saying the Arizona Constitution gives the Legislature "broad powers'' to discipline its own members "and Mr. Shooter's expulsion was well within that authority.''