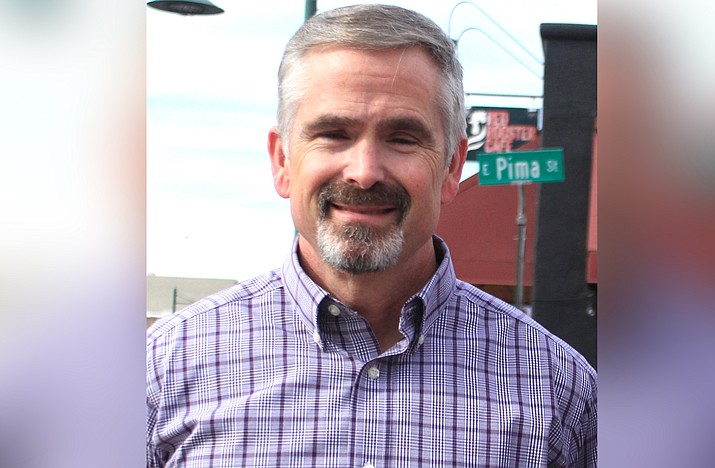 Having completed about six months on the job, Cottonwood City Manager Ron Corbin took time to reflect on how things have gone so far, and what have been the biggest surprises and adjustments along the way.

Corbin left his position as deputy city administrator with the City of Yuma – which has a population of about 95,000 – to take on the top position in Cottonwood’s government in January. He bought a home in the area.

VVN: What are some of the biggest similarities and between the governments of Yuma and Cottonwood?

Most cities have some lifelong residents who are not going to relocate and who think of their city as their home, and Yuma and Cottonwood are no exceptions.

VVN: What have been some of the biggest similarities and adjustments, moving from Yuma to Cottonwood?

Corbin: One adjustment was the airport: In Yuma, the city government wasn’t directly involved with theirs. Here, there’s been a lot to learn on that side.

As city manager, I find myself at a Council or a commission meeting at least a couple of times a week. A deputy administrator of a large city didn’t typically need to be at as many night meetings, so there have been some longer hours.

For these first six months, my wife wasn’t up here with me, and has been back in Yuma, and our kids are grown, so it’s not like I’ve been missing personal time at home being at meetings.

VVN: How tough has it been to be in conversations about growth, with so many people wanting to buy property and/or relocate to the area?

Corbin: Once you find a beautiful place like the Verde Valley, you don’t want to change it or spoil it. But, I get it: the more people move here, the higher the chance of spoiling it, and folks get really excited when they see a potential for growth to go wrong.

I don’t fault anyone for getting mad, but it doesn’t help to stay mad. That doesn’t help us grow or do things like, say, develop and expand parks and rec. The price of housing and real estate here is so much lower, it’s automatically attracting Californians and others whose pensions and other income can be used to buy so much more here.

In addition to more residents – 12,000 in town full-time and 40,000 area residents who are in Cottonwood at least one weekday each week — we have a lot of tourism, and that will continue to be a huge part of our economy.

Doug Bartosh (city manager of 11 years, who retired at the end of 2018) did a great job with many things, and prepared for this transition. The makeover and usefulness of Old Town, where people have invested, now has visitors coming just to see what’s new here, and many of them decide, some almost instantaneously, that they want to live here.

VVN: For folks relocating here, what do you think is the balancing principle between bringing with them some of the comforts and customs of “home” versus adapting to local culture and conditions?

Corbin: The nice thing about something like the Airport Commission (whose most recent set of recommendations will be presented at the Aug. 13 regular Cottonwood Council meeting) is that it will be an example of something aired in public, where we can get input on more than one side of issues.

Whenever everyone’s willing to “play nice” and communicate their needs and wants, it makes a big difference.

VVN: What do you see happening with city offices being in Old Town, and consolidating and the city reducing the amount of properties it owns?

Corbin: There are no concrete plans now to consolidate or move any city departments. We do feel we have more properties than we need, and, of course, the Old Town buildings we’re using would be best served in their intended role as prominent business sites. However, moving and consolidating is expensive, too, so we are studying our options.

Part of this depends on the community, and if someone has a particular use in mind for a facility currently occupied by the city. We want new businesses and we want existing businesses to be able to expand or grow.

The building some folks call the former “Rough Cuts” center, owned by our local hospital, would have been expensive in only a feasibility study, so the city has no action planned regarding use of that place. The ball is not in the city’s court.

VVN: What have you learned about the citizens of the Cottonwood area in terms of the needs of the elderly?

Corbin: Quite a bit. Some specific topics might be addressed in the months ahead in small segments, on the city’s YouTube channel, “City of Cottonwood Az.”