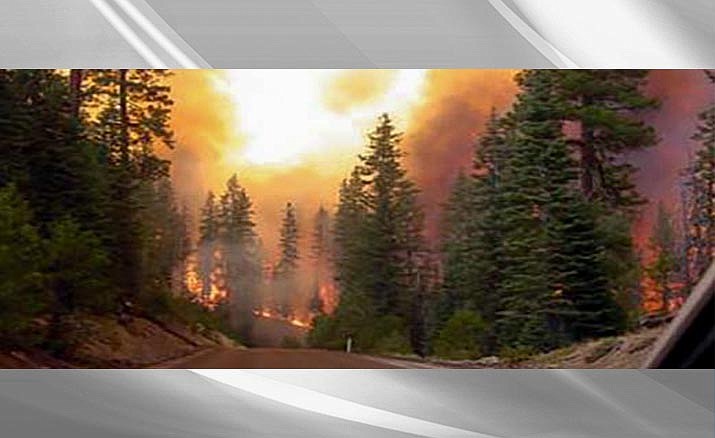 The Woodbury Fire has grown to 123,875 acres, started at about 1:30 p.m. on June 8 approximately five miles northwest of Superior.

TONTO NATIONAL FOREST – As of 6 a.m. Tuesday, firefighters have contained 80% of the Woodbury Fire.

The fire, which has grown to 123,875 acres, started at about 1:30 p.m. on June 8 approximately five miles northwest of Superior. It is not known how the fire started, according to Incident Information System: InciWeb.

At times last week, there were more than 900 total personnel involved with containing the fire, according to InciWeb. As of Tuesday, 321 firefighters are working on the fire.

According to the Tonto National Forest website, “helicopters and fire crews will continue to suppress hotspots internally” as current weather conditions “continue to challenge firefighters.”

“Smoke may be seen due to pockets of vegetation burning within the fire perimeter,” according to the Tonto National Forest website.

Building, maintaining, attending or using a fire, campfire or charcoal-burning device are prohibited outside of metal fire rings and metal pedestal grills provided by the Forest Service in developed recreation sites.

Discharging a firearm is prohibited, except for taking game in accordance with Arizona hunting laws.

Smoking is prohibited under most circumstances.

Tortilla Flat businesses are still open, according to Tonto National Forest, though SR 88 is closed from Tortilla Flat to SR 188 at Theodore Roosevelt Dam.

Apache Lake, Apache Campgrounds, picnic sites and trailheads will remain closed until SR 88 is reopened, according to the Tonto National Forest website.

“This closure is expected to be a long term closure beyond the 4th of July holiday,” according to the Tonto National Forest website. “The closure will remain until the Forest Service and Arizona Department of Transportation evaluate and address all safety concerns along SR 88.