Early birds get the first corn 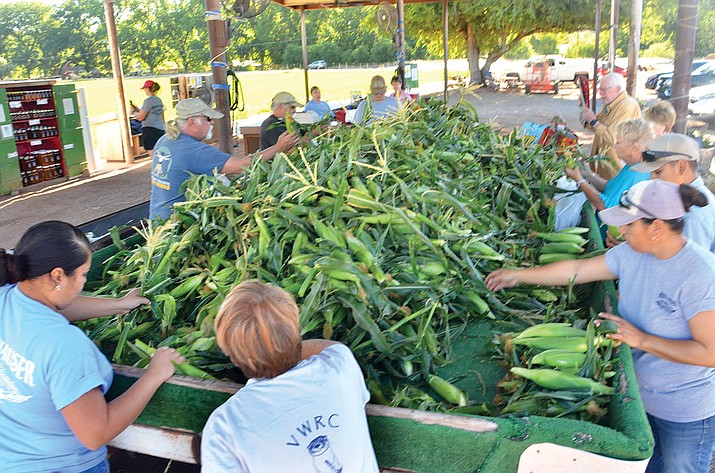 It’s always an exciting day at Hauser & Hauser Farms in Camp Verde, where more than a dozen customers were waiting at 8 a.m. for the farm family to open for the season Tuesday.

An hour later, that number doubled with people sifting through a huge pile of corn and corn husks piled onto a small flatbed trailer.

A tractor had just brought in Tuesday morning’s freshly picked corn to the popular farm stand which stays open until they sell out that day’s batch. Then, the next day, the farmers do it again.

They sell corn until mid-August, explained Claudia Hauser as she put out the “open” sign early Tuesday morning.

This year they planted about 21 acres of the popular corn, which is cooked at barbecues and homes throughout the Verde Valley. Some busy days they get hundreds of customers sifting through the corn on their farm tractor’s trailer.

Hauser said she didn’t know how many people to expect the first day, but was pleased by the early turnout. She has only advertised on social media that they are open, she said. “I think once the word gets out” it will be busy, especially around the Fourth of July which is the busiest time of year for them, she added.

The corn is picked fresh every day and that’s why it so good, explained Hauser. “We don’t hold it over, We’re pretty good at gauging how much to pick so we don’t waste it.”