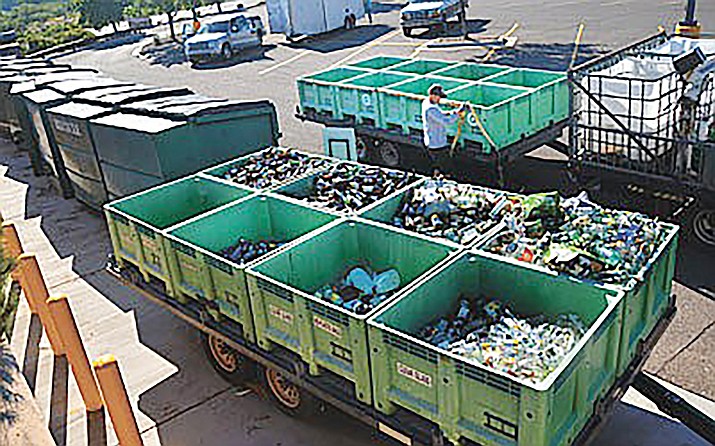 One year, ago the situation with Sedona Recycles was bad.

All of which makes you wonder if it will even be around a year from now.

This week, saw a worsening of that pattern as Sedona Recycles pulled its bins from the area across from Mingus Union High School. It was a location that in recent years had become as much a site for dumping old mattresses and discarded furniture as it was used for legitimate recycling.

Also during the past year, Sedona Recycles pulled its bins from the Clarkdale-Jerome School after the town opted to contract for the service with Cottonwood’s contractor, Patriot Disposal.

According to the Sedona Recycles website, there are just 10 sites in the Sedona-Verde Valley region where you can go to dispose of recyclable material. Most are in Sedona, and soon that list will be down to nine as the site near the Verde Village Clubhouse is the next targeted for removal.

As for the Sedona Recycles services in Cornville and the Village of Oak Creek, Yavapai County Board of Supervisors Chair Randy Garrison said Sedona Recycles’ contract with the county is up for review by September.

“While we can’t see letting large parts of the northern part of the county going unserved, we’ll have to change something,” said Garrison.

One of the things that must change, Garrison explained, is the trash-dumping abuse that has become so prevalent at drop-off sites that are supposed to be used exclusively for recycling.

Easier said than done. It’s difficult to convince a slob that it’s not cool being a slob.

The irony in all of the above is that Sedona Recycles was the first to establish a recycling consciousness in the Verde Valley.

Going back almost three decades, long before sustainability became the catchphrase of government and business alike in the Verde Valley, Sedona Recycles was first in spreading the message locally of use, re-use and re-use again.

Sedona Recycles taught us to be a community that cares about recycling.

We’re the ones now seemingly intent on sending them to the recycling heap.