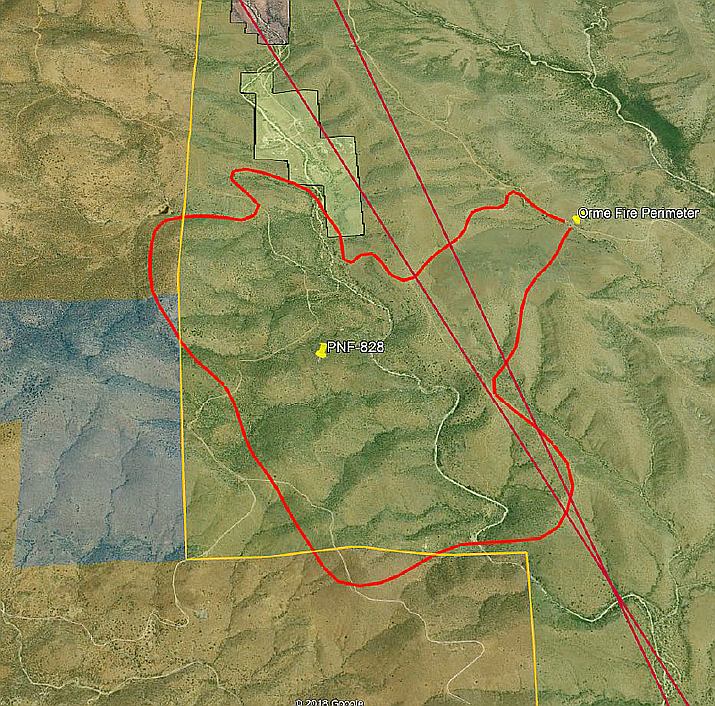 Marked in red, the perimeter of the Orme Fire as of Friday morning, July 5, 2019. (PNF/Courtesy)

PRESCOTT – Orme Road south of State Route 169 will remain closed to the public on Friday as firefighters slow forward progression of the 894-acre Orme Fire located approximately six miles south and east of Dewey on the Verde Ranger District.

According to a July 5 press release from the Prescott National Forest, firefighters “hope to have 100% containment on the fire” by Saturday afternoon.

The “quick response and aggressive action” of firefighters on July 4 kept the fire from damaging any structures or ranches in the area,” the press release stated. “Firefighters worked into the evening securing the edge of the fire and reported minimal activity overnight.”

Resources assigned to the Orme Fire include two Hotshot crews, one Type 2 crew, one Type 3 helicopter and multiple engines, the press release stated.

At this time, the fire’s cause is unknown and under investigation.

TONTO NATIONAL FOREST – The 231 firefighters working to control and extinguish the Woodbury Fire probably aren’t concerned that the fire is less than one-fourth the size of Arizona’s largest fire on record.

At 90% contained as of 6 p.m. July 4, the Woodbury Fire grew to 123,875 acres at its biggest point, according to a July 5 press release from Tonto National Forest.

Tonto National Forest is in Stage 1 Fire Restrictions and fireworks are not allowed on public lands at any time. The closure will remain in effect until Aug. 31 or until rescinded, whichever occurs first.

It is still unknown the cause of the fire, according to the incident information system InciWeb. But the expected containment date is midnight Monday July 15.

Fire activity should be limited to interior pockets of unburned fuel over the next 12 hours, InciWeb also reported.

“Smoke may continue to be visible from US HWY 60 and HWY 188 and the communities surrounding the Superstition Wilderness as vegetation continues to burn within the perimeter,” InciWeb also reported.

According to data from Wikipedia.com, the Woodbury Fire is currently the state’s fifth largest fire since 1977. Though Wikipedia lists the Woodbury fire at 112,899 acres, both InciWeb and the Tonto National Forest websites say that Woodbury is at 123,875 acres.

For more information about the Woodbury Fire, visit inciweb.nwcg.gov/incident/6382 or fs.usda.gov/detail/tonto/news-events/?cid=FSEPRD639892.