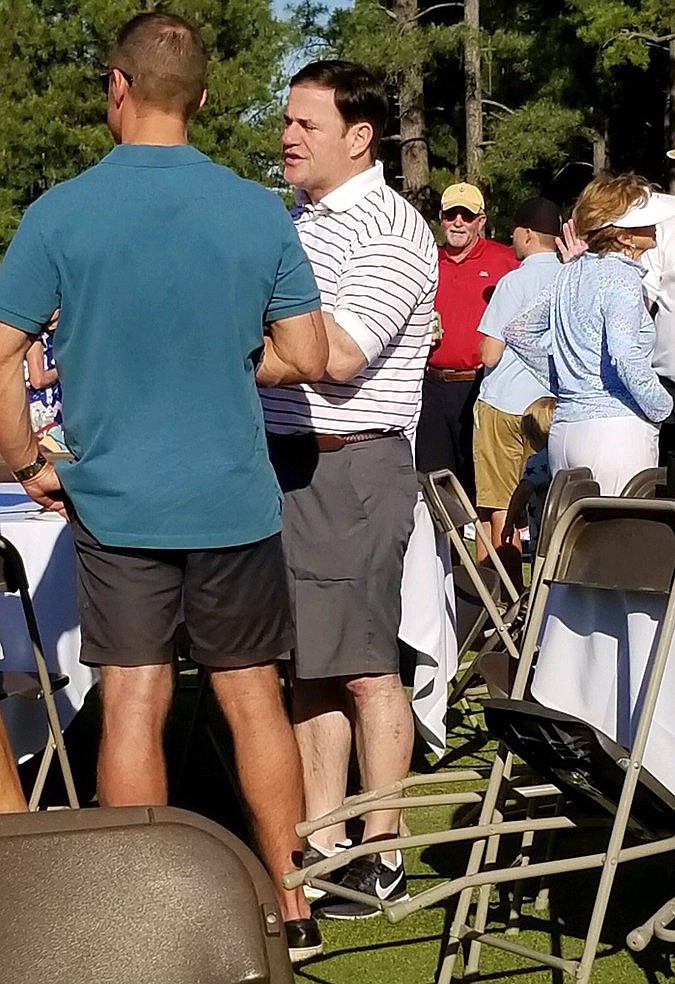 PHOENIX -- Don’t look for Gov. Doug Ducey to trash all his Nike wear in the wake of his blistering criticism of the company.

Just two days after Ducey accused the sportswear company of “shameful’’ conduct the governor showed up at an Independence Day in Coconino County sporting a pair of Nike sneakers. It also came two days after the Patrick Ptak, the governor’s publicist, refused to say whether his boss intended to follow the lead of Texas Republican Sen. Ted Cruz who said he was going to boycott the company.

On Friday, confronted with the photos provided by the Coconino County Democratic Party of Ducey at the outdoor event, Ptak said it’s no big deal.

“The governor didn’t call for a boycott,’’ Ptak said. “He didn’t even say the company wasn’t welcome to do business in Arizona.’’

What Ducey did say is that he was using his authority to quash an offer by the Arizona Commerce Authority to provide Nike with a $1 million incentive to locate a new 500-employee factory in Goodyear.

That occurred in the wake of a corporate decision not to sell $120 shoes with the image of the Betsy Ross flag, the one with the 13 stars in a circle, after the Wall Street Journal reported that former NFL quarterback Colin Kaepernik, who has been featured in Nike ads, complained to the company that the flag is a reminder to the black community of the slavery that occurred in the 18th century. The company, in a statement, would say only that it decided to halt distribution “based on concerns that it could unintentionally offend and detract from the nation’s patriotic holiday.’’

That move sent Ducey into a minor tweetstorm at 2 a.m. on July 2, saying in 9 different posts how he was “embarrassed’’ for Nike and that he company “has bowed to the current onslaught of political correctness and historical revisionism.’’

“It is a shameful retreat for the company,’’ the governor continued, saying American businesses should be proud of the country’s history, not abandoning it.

“We don’t need to suck up to companies that consciously denigrate our nation’s history,’’ Ducey wrote.

Despite that, Ptak said Friday that the story “was about our flag and our founding’’ and not about the company -- or Ducey’s decision to keep wearing his Nikes.

The fate of that Nike expansion is unclear.

After the flap, Goodyear Mayor Georgia Lord said her city intends to “honor the commitment’’ it had made on Monday with Nike to provide about $1 million in incentives and a like amount in fee waivers.

Nike, for its part, put out a statement saying still intends to build a 500-employee plant but did not respond to questions of whether that will be in Arizona.

In the wake of Ducey canceling the state aid, officials from California and New Mexico have made public bids for the company to move there.