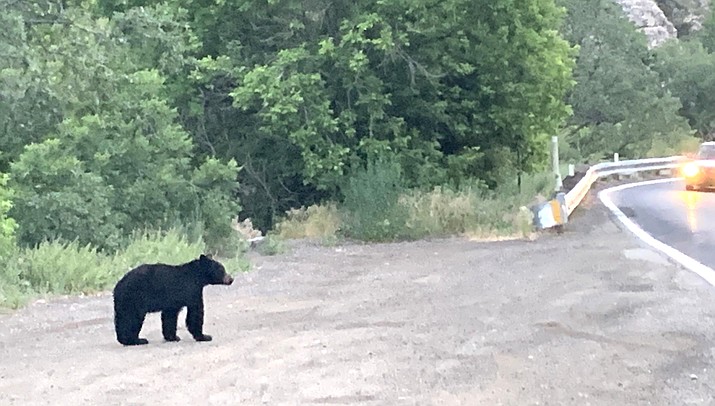 Prescott’s Tom Norvelle recently photographed this black bear along State Route 89A outside of Jerome. Arizona Game and Fish officials say there are between 50 and 70 bears in the Mingus Mountain range, including Woodchute Mountain and the Black Hills through the community of Cherry. Tom Norvelle Courtesy photo

There hasn’t been a reported bear sighting in more than a week in Jerome, but that doesn’t mean no one’s seen a bear.

That is what Jerome Police Allen Muma is worried about -- whether residents may be trying to protect a 1-year-old cub or other bears from authorities believing they may be killed.

Muma said there have been about a half-dozen “rumored” reports of a bear in Jerome recently in the Gulch, on Center Street and near the dumpsters at the Grand Hotel.

About a week-and-a-half ago there was a report of a small, light-colored bear that stood up and gazed at some people walking a dog on Center Street before running off, explained Thomas Bagley of the Arizona Gama and Fish Department. The bear was looking around in curiosity, Bagley said, and probably weighed about 75 pounds.

Bagley said a month ago he found some bear tracks by the Grand Hotel. Three days of trying to trap the bear were unsuccessful.

The game and fish manager said if the bear is approaching human territory, it’s much better to trap or dart the bear and relocate it than let it get accustomed to humans, trash and garbage.

Muma said he believes people may be trying to protect bears by not reporting them. He said it’s not in the animal’s best interest to get reliant on human food and interaction.

It’s better to relocate before it’s too late, he said. 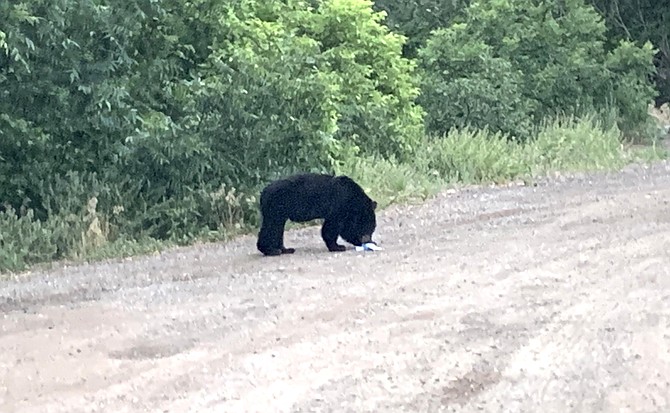 Prescott’s Tom Norvelle recently photographed this black bear along State Route 89A outside of Jerome. Arizona Game and Fish officials say there are between 50 and 70 bears in the Mingus Mountain range, including Woodchute Mountain and the Black Hills through the community of Cherry. Tom Norvelle/courtesy photo

People who think they are “protecting” the bear by not reporting sightings are putting the bear in greater danger, Muma said.

“Wild animals do not interface well with humans in a town setting, and the longer they go without being removed to a wilderness area, the greater the likelihood that harm will come to them,” the police chief said.

Muma said this last reported bear in Jerome was probably about a year old and most like just recently left its mother. “It’s just curious,” Muma said.

Bagley told The Verde Independent in 2018 there are between 50 and 70 bears in the Mingus Mountain range, including Woodchute Mountain and the Black Hills through the community of Cherry.

Bagley on Tuesday said if a person runs into a bear, he advised to first pick up any children that may be with you. Then let the bear know you are there, and even the scent of a person will send it running away, especially if it’s a cub.

“Don’t run,” Bagley said. “Don’t play dead. That is suggested for grizzly bears, but these are black bears in Jerome. If the bear won’t go away, talk to it, yell at it and throw a stick at it. The bear should run away,” he said.

Both Muma and Bagley agree that the bears may be taking advantage of the apricot season in Jerome as well as dumpsters.

Bagley agreed that a bear can get “bolder and bolder” if people don’t report it. Bears tend to come out and night in this hot weather and a person may startle one in the dark if the animals are roaming around town.

Tom Norvelle said he was driving from Prescott to Cottonwood on SR89A on Mingus Mountain when he noticed something rustling in the bushes along the road.

It was about 5:30 a.m. Thursday, Fourth of July, so he stopped in a pull-off about a mile south of the top of Mingus Mountain and saw a black bear poke his head out the bushes.

As Norvelle sat in his car, the bear walked out of the bushes and walked over to an empty Bud Light box and began sniffing it.

Norvelle said he quickly stuck his cell phone out the sun roof of his car and took a photo as a car came around the corner and startled the bear.

“It was just a young black bear,” Norvelle, who works as a helicopter pilot for Northern Arizona Healthcare’s Guardian Air in Cottonwood, said Monday. “It was about two-and-a-half–feet-tall.”

Norvelle was then surprised when he saw the bear again Saturday morning in the same location, but on the other side of the road on the hill. Another car was stopped in the pull-off watching the bear, which was on the north side of the highway this time. Then the bear ran off up the mountain, he said.

Norvelle thought the bear was looking for food that was spilled at the different pull-offs. “It was pretty healthy,” he continued. “It didn’t really seem frightened.”

“That’s the first bear I have ever seen,” Norvelle added.