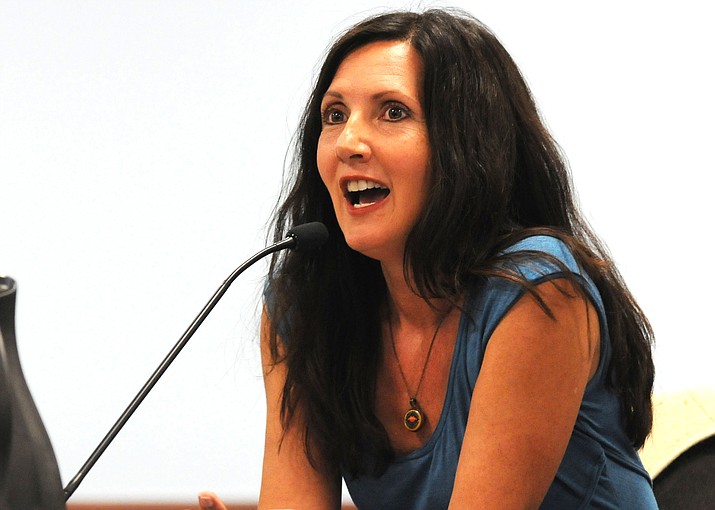 APS customer Stacey Champion tells state utility regulators on Wednesday they acted improperly in approving a rate hike for the company and urged them to roll back the charges. Capitol Media Services photo by Howard Fischer.

PHOENIX -- Late Wednesday, state utility officials rejected a last-ditch plea by an Arizona Public Service customers to undo the rate hike they approved for the state’s largest electric company in 2017.

The 4-1 vote came despite comments from Stacey Champion to members of the Arizona Corporation Commission, alternately arguing that the increase is unjustified while also attacking the regulators for voting for the plan in the first place.

“Who the hell is running this place?’’ she asked. “Is it staff? Is it APS? Is is staff and APS together?’’

Champion, who filed the paperwork to overturn the higher rates was unimpressed that the commission ordered APS to start a new rate review, particularly as it allows the utility to keep collecting the higher rates, at least for the time being. She said that provides little comfort to those who will have to continue to pay more for the next 12 to 18 months.

“You have a tool that you can use and have the cojones and ovaries to frickin’ stand up to this Goliath that appears to run you,’’ Champion said.

At the heart of the issue is that 2017 vote by the commission -- only two of the current members were on the panel now -- to allow the utility to collect another $95 million a year from customers.

APS promoted the change as an average 4.54 percent increase, or $6 a month.

But regulators also allowed the company to institute a series of new rate schedules, moving customers into what APS said would be the closest to their current plan.

There were, however, some significant changes in many of the terms like for things like the time-of-day rate plus charges based on peak demand. And Champion said that about a third of customers ended up with bills sharply higher than that promised $6.

APS has not denied the numbers but said the 4.54 percent was an average. And company officials said some customers actually are paying less now.

But there’s something else.

Champion charges that in shifting customers to new rate plans that did not necessarily mean the most cost-efficient. And she said that APS is earning far more than the $95 million extra it was promised.

But Commissioner Justin Olson said he was hesitant to roll back rates to where they were, even if with a 4.54 percent across-the-board increase, what the company claimed was the average.

He said even if there are many customers who are paying sharply higher bills under the new rates argued there are “hundreds of thousands’’ of APS customers who actually are paying less now than they were before the rate case was approved, Olson said it would not be fair to deny those customers a break while the commission takes another look at the APS rates.

“This is the best way to move forward for all ratepayers,’’ he said. The other question weighing on regulators is whether APS would have grounds to sue the commission for taking away the higher rates. Champion said that should not be a fear “if you’re doing that to protect the public.”

She said the record in this case provides more than enough justification for the commissioners to revisit their 2017 decision.

“The public was lied to,” she said. Commissioner Boyd Dunn, however, said it’s not that simple. “I have no concern about being sued,” he said.

But Dunn, an attorney, said any review would require that APS get “due process” protections to ensure that changes are not overturned by a court. And he said that probably would take the same 12 to 18 months that would be needed to review a new APS rate request. Wednesday’s commission decision is not, strictly speaking, the end of the matter.

First is the question of whether APS actually is generating more than the $95 million a year in new revenues that the company was permitted to collect. That relates to the question of whether customers got -- and understood -- that the commission not only allowed APS to implement new rates but automatically put customers into what the utility decided were the most similar plans, plans that were not necessarily the most economical.

In fact, Olson said half of APS customers are not currently on the cheapest possible rate plan for them based on their habits and use. That, in turn, raises the question of whether customers, lacking information on which of the new plans would be best, ended up enrolled in more expensive plans, effectively boosting the utility’s bottom line by more than that $95 million approved by the commission.

One thing Wednesday’s order does require is for APS to give ratepayers a new chance to switch rate plans. That is of particular concern because some customers were switched automatically, a situation that did result in some sharp bill increases. It also mandates that APS must identify ratepayers whose bills went up more than 10%, as well as those who are not on the most economical rate plan. More to the point, the company must provide customers with “targeted educational materials’’ to help them lower their electric bills and explain how they can switch to a more economical plan.

And the commission has ordered the company to provide quarterly reports of its revenues between now and the time new rates are approved. Commissioner Sandra Kennedy voted against dismissing Champion’s bill to roll back the rates. Kennedy, who was not on the commission at the time of the 2017 rate case, questioned that decision. She pointed out that the staff at that time actually said initially that APS was earning too much.

But the staff ultimately agreed to sign off on that $95 million deal agreed to with the utility.