Camp Verde looks for best use of remaining $3.2 million for initial work on Sports Complex 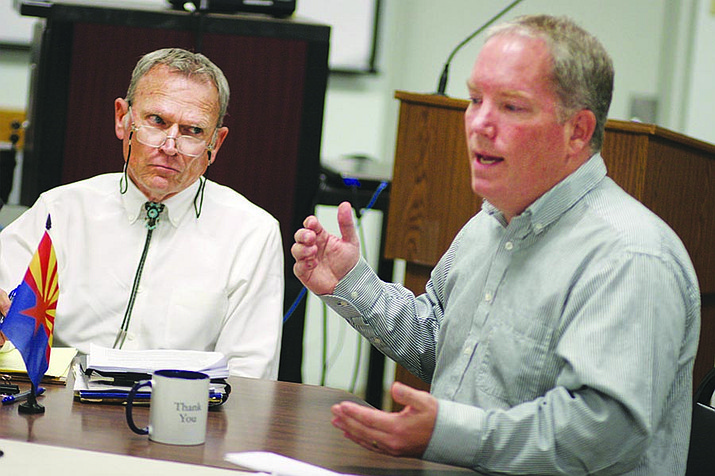 Camp Verde Council Member Joe Butner, left, listens as Town Manager Russ Martin suggests the town seeks re-bids – that would include value engineering – on Phase 1B of the sports complex. Butner said that value engineering “sounds like degrading the plan somewhat but getting pretty much what we set out to get.” VVN/Bill Helm

CAMP VERDE – Value engineering can be defined as understanding which materials to use, as well as when to build.

Wednesday, the Camp Verde Town Council asked Town Manager Russ Martin to reject all three bids to complete Phase 1B of the town’s sports complex, and to explore value engineering options before going to re-bid.

But not before Martin first suggested going out to bid a second time.

“I appreciate your suggestion that it might be a good idea to step back,” said Councilman Joe Butner. “Value engineering sounds like degrading the plan somewhat but getting pretty much what we set out to get.”

The majority of council’s special work session was considering the $3.2 million remaining in the town’s budget to build the complex’s first phase.

‘Getting away from us’

Of the roughly $7 million in park bond funds, Camp Verde has spent $3.829 million on Phase 1A, according to council’s July 10 agenda packet.

Butner said that the money the town has spent “is getting away from us.”

Martin agreed: “But the cost actually has been less to get to this point then anticipated leaving us with more to work with for the final piece of first phase but less than if we can’t reduce the costs in this construction environment,” he said.

Bids to complete Phase 1B were “much higher than our engineers estimated,” Martin told council.

But the bids weren’t just more money, he said. It’s that they did not include all parts of the desired phase, such as a second baseball/softball field.

One of the benefits of going to re-bid, Public Works Director Ron Long said, is that summer construction jobs are more expensive than winter jobs.

“We’re in a good economy,” Long said. “Contractors are busy.”

Long explained that going to re-bid is best option the town would have to keep prices down.

“It would allow grass to be planted in April or May, so it has a summer of growth before you play on it,” Long said.

Martin said he hopes to go to bid no later than December, with fields ready for the 2020 fall soccer season.

“Are we looking at it as a time factor? Or dollar factor? Maybe as a community we need to be patient.”

Plans for the main parking lot along the south side would include space for about 250 cars and an additional 30-40 cars in a secondary lot to the north.

The complex also includes an existing parking lot that was constructed on the park’s east end and is part of the Perimeter Trail project.

Plans for the completed secondary lot include an asphalt millings surface and space for about 40 cars as well as about 10 vehicles pulling horse trailers.