Coaches' corner: Wrestlers come from all over to compete in Weekend Wars 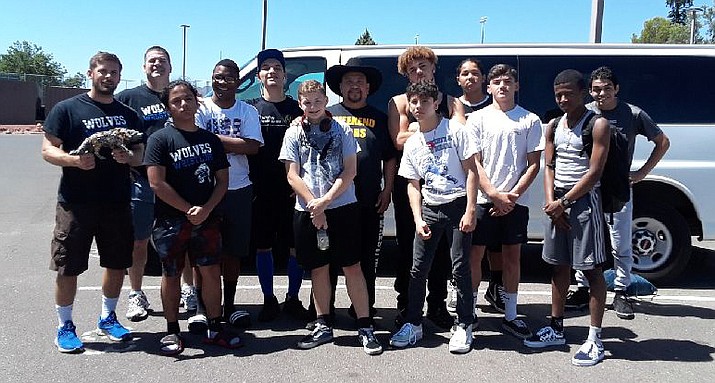 At a time when tourism is suffering from the effects of the recession, Weekend Wars Tournaments has been good for kids and good for Cottonwood’s economy.

Many volunteers traveling hundreds of miles from all over Arizona and out of state, representing different schools and wrestling clubs, are coming together bi-monthly for kids. They all demonstrate how team spirit, a top notch wrestling facility and innovative marketing can translate into sport tourism dollars, bringing spectators, athletes and their families to local hotels, restaurants and shops.

It’s no secret why Mingus is improving in leaps and bounds. It’s every coaches dream to have a team with a work ethic. They come in everyday to practice and then compete on weekends. They not only compete here at home against formidable opponents in Arizona, they have also competed multiple times out of state in Colorado, New Mexico, California and Nevada. Their just a role model to show others what hard work and competition will do to developing that mindset to be a champion. This coming season they are coming out hungry to win.

It takes time, to win a team title, as well as build a great coaching staff, a dedicated administration and a good feeder program. As we move forward towards these goals we look to once again become the great wrestling dynasty we once were. The kids have worked hard and ready to reap their rewards as the new season approaches. They are excited and ready to go. As far as coach Klint McKean is concerned, success isn’t defined by the trophies his wrestlers will earn for Mingus Union High School. It’s the discipline and perseverance the sport fosters in the young men and the life-lessons it teaches them. Making differences in the lives of young people is his top priority.

Ryan Griffin and Tyler Griffin put on an exceptional show, defeating some very good opponents. The Griffins are always involved in some form of competition. Whether it’s wrestling or just challenging them-selves to improve in life. These guys train year round. They are always competing and putting it on the line. That more than anything else, has made them very special people. Their desire to improve has always impressed me. They are constantly finding ways to try to make them-selves better. As they brave through uncertainty and build confidence in their abilities one can only imagine what they will attain.

At 135 Pounds Isaac McKean hit a lightning-fast snatch single, which he eventually finished for a 2-0 lead. Our formidable opponent got in on a nice single in the second period and his fans smelled an upset! However, Isaac McKean showed why he is one of the best in the state with a stunning counter for a takedown. Isaac McKean now has a whole repertoire of armaments that he utilizes to dismantle and submit those who challenge him. This bout was the highlight of the day finishing with a score of 8-1. He is on a convincing mission this year to catch the state championship title that eluded him last year.

At 126 pounds Braden Arnold is a tough, solid wrestler who keeps coming at you, no matter what he might be hit with. He’s skilled and at the same time, has that mental toughness that makes all the difference in the tough matches. However this weekend proved frustrating to him. Having to work and miss practice really hurt his ability to chain wrestle which caused him to experience a loss today.

At 106 pounds, the absolutely unflustered Noah Vega, used a late first period blast double, an awesome Fireman dump and some incredible crab riding to wear down the seemingly unbeatable opponent and win 7-3. Noah is a tremendous example for all young people —set your goals high, work hard and do everything possible to achieve those aspirations.

Our kids learn that it is important to set goals, to follow your dreams and reach for the stars. That we need to pursue our visions, as well as take risks that may be foreign to us. To take every chance or opportunity that comes your way, because they go fast, and regret is the one thing that can never be made up for. This best describes Dathan Wimer who has come a long way. One cannot reach their full potential unless they find the desire and dedication needed to become a hard worker. Although this is his first year, he has overcome the lack of experience with a hard work ethic. He has shown steady improvement each and every week. He makes us very proud.

Wesley Demille, Elias McKean and Dakota Jeffords continue to improve daily. With their recent rededication towards school and wrestling, they have the potential to become a multiple time state champion in the future. By fostering an educational philosophy that values and promotes self respect, pride and integrity, they re-chart their future towards becoming an aspiring college student and good citizen. These boys will go far in life because they are the kind that once they make up their minds to do something, they will do it. My congratulations to these boys for achieving this weeks, most improved.

In the middle School division, one of my favorite matches of the day had to be watching Caleb Underhill and his brother Xander Underhill, who have minimal wrestling experience. They were paired against opponents of equal height, weight and knowledge. It looked like two snakes intertwined and wrapped around each other struggling to gain the advantage. There was no rhyme or reason to any of their moves just two boys going at it. The score was going back and forth causing everyone to start cheering for their team mate. It looked like an old western brawl with both guys at the end, lying on the mat exhausted from battle. The Underhills ended up placing in the top three and earns them this week’s “Atta Boy” Award.