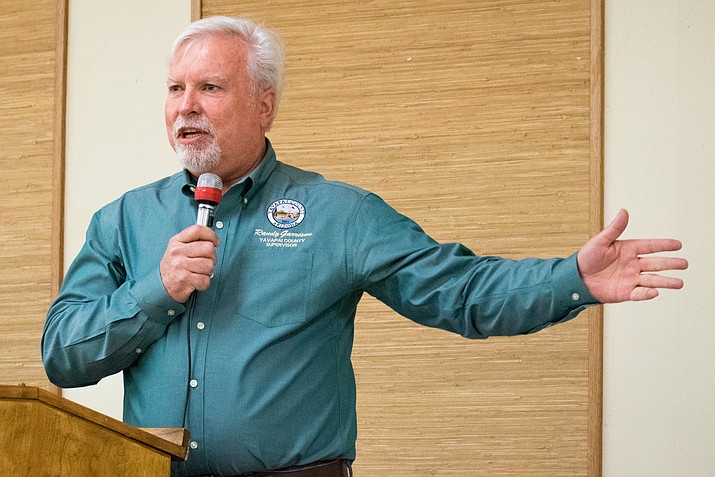 County Supervisor Randy Garrison: “This is one of the most important initiatives in this County. This new route could reduce emergency response times, relieve congestion, and provide a critical link for our network.” VVN file photo

VERDE VALLEY – A connector road linking SR 260 to Cornville Road is projected to draw traffic volumes of as mamy as 8,000 motorists each day by 2045, according to Yavapai County’s traffic model study.

“This road would help some of the impact, said Garrison.

Monday, the Verde Connect group will announce which route it recommends be built in part with a $25 million Better Utilizing Investments to Leverage Development grant.

Not building a road, Garrison said, “is still an option.”

“The Verde Valley has a rather diverse transportation network,” he said. “The extension to Beaverhead Flat would allow people to move to SR 260 or to stay in Camp Verde. Camp Verde would utilize some increased numbers.”

On June 24, Verde Connect posted to its website a traffic modeling study that projects which parts of Cornville Road, SR 260, SR 89A and I-17 would experience low-, medium- and high-congestion by 2025, and by 2045.

The traffic analysis has been conducted for the 2019 existing conditions, 2025 Verde Connect opening year, and 2045 “for all build alternatives,” the study said. The alternatives not shown in the exhibits displayed “very similar results when analyzed during the travel demand model.”

The study area is bounded by I-17, SR 260, SR 89A and Cornville Road. The potential roadway and bridge across the Verde River would connect the northern portion of the Yavapai-Apache Nation and the Town of Camp Verde to SR 260.

Of the eight options the county announced in Cottonwood June 11 and in Camp Verde June 12, two are not recommended by the county, and a third is to not build the road.

In support of Verde Connect

In June, the Camp Verde Town Council voted unanimously to not support the Verde Connect project.

“Over the last 25 years, the need to connect these two corridors have been identified as a priority need for the region in both Camp Verde’s long-range planning documents, but also in the Verde Valley’s regional transportation plans,” Mayor German wrote. “I strongly urge your support for this project as it is a significant investment for the region that will continue to promote economic vitality while maintaining and enhancing the quality of life for our region’s residents.

German’s letter is one of 12 that asked Chao to support the grant. Letters were also written by representatives from the Yavapai-Apache Nation, the municipalities of Clarkdale, Sedona and Cottonwood, and Arizona Department of Transportation. Sen. Sylvia Allen, two congressmen and one representative also wrote letters.

“The proposed project would provide a benefit of serving as an alternate route if I-17 were to close for emergencies between SR 260 and Middle Verde Road,” ADOT Northcentral District Engineer Audra E. Merrick wrote on July 11, 2018. “This connection has the potential to significantly reduce the detour length for I-17 traffic.”

“We have significant concerns in the Verde Valley,” he said. “We have transportation issues. When you get into these positions of leadership, you want to make a difference in the limited time you have.”