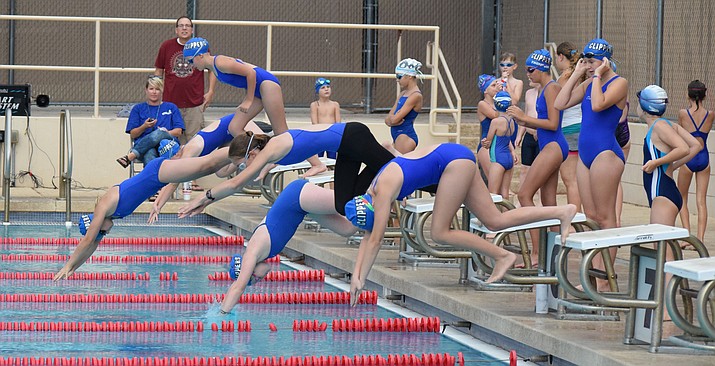 Members of the Cottonwood Clippers’ B team dive in the pool in the 50-yard butterfly on Friday night at the Cottonwood Aquatics Center during their leg of the Red, White & Blue Meet. VVN/James Kelley

The Cottonwood Clippers Swim Team has a record number of swimmers this year but still manages to maintain the camaraderie.

On Friday the Clippers hosted their annual Red, White and Blue Meet, an intra squad scrimmage held throughout the day. On Saturday they will host the Verde Valley Invitational.

“It’s been an awesome season,” Clippers head coach Gretchen Wesbrock said. “We hit a record of 150 swimmers this season for the Clippers, which was incredible. We added some pool time, which has made a huge difference and we’re so thankful for just all the support from the City of Cottonwood and the rec center staff. The kids are just improving drastically.”

Wesbrock thinks the increase in participation this year is due to their family support.

“I just think that more families and more kids are wanting to be involved in it,” Wesbrock said. “It’s such a great sport and certainly a great summer sport. Our families are so incredible. You come to any practice time, — even early in the morning at 6 a.m. — and there’s parents that will be sitting and chit chatting. So there’s just a great sense of community within this sport, because it’s a sport that really accepts all different ability levels.” 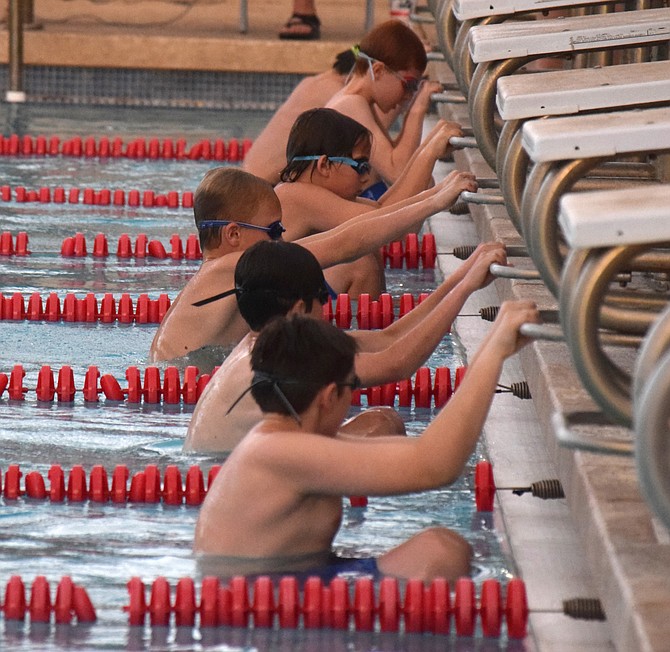 Members of the Cottonwood Clippers’ B team prepare to start the 50-yard backstroke on Friday night at the Cottonwood Aquatics Center during their leg of the Red, White & Blue Meet. VVN/James Kelley

Recently when a six year old swam the mile his older teammates cheered as hard for him as the older kids going after records Wesbrock said.

“Our little Jubal, one of our little guys who swam the mile and took an hour and a half or an hour and 45 minutes, I don’t remember what his time but everyone’s just cheering him on, excited and they’re just as excited about him as they are someone who’s going for one of the team records for the mile, so it’s just a really special community and kids they just have the ability to improve no matter where they start,” Wesbrock said.

With more swimmers and more practices, the Clippers have had to add a couple more paid coaches and lots more volunteers.

“We’ve got a great group of high school and middle school students who help volunteer, especially with our little ones,” Wesbrock said.

“The Clippers have such an incredible tradition, I mean they’ve been around since 1981 and so many great coaches and such a great reputation, I just think we’ve got such a solid coaching staff,” Wesbrock said. “Some of our coaches have been here longer than John (Wesbrock) and I have and we’re not going anywhere, so I think there’s just that continuity that creates something really special when you have coaches and families who keep coming. It grows the sport for sure.”