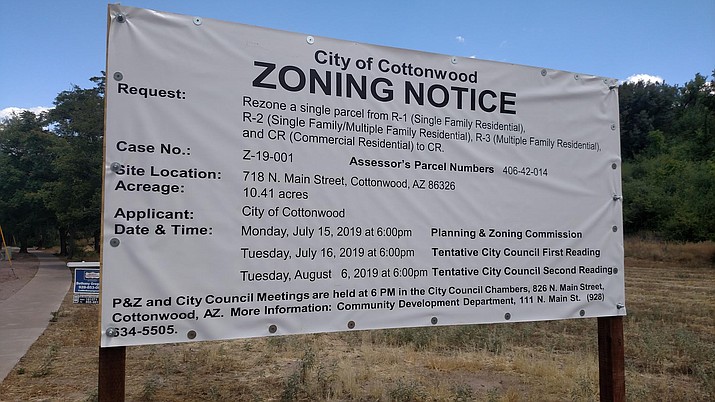 The Cottonwood Planning and Zoning Commission plans to address this North Main property at Monday's meeting.

The agenda for Monday’s Cottonwood Planning and Zoning Commission’s 6 p.m. meeting includes a public hearing on the re-zoning of land along a historic section of North Main Street.

A parcel located at 718 N. Main, owned by LNN Enterprises, Inc., currently has four zoning designations: R-1, R-2 and R-3, as well as commercial residential (CR). The proposal, initiated by the city of Cottonwood, is to change the designation to simply CR, to eliminate confusion created by having four zones apply to the same property.

The parcel is located along the same stretch of North Main Street where the Cottonwood City Council seemed willing to relocate and possibly build a new City Hall several years ago, but enthusiasm for that idea has waned. City Hall and the City Council Chambers have occupied storefront-style buildings in Old Town for years.

The parcel is slightly more than nine acres and is horizontal, stretching along the south side of Main Street, where it runs in an east-west direction. It has become a green space and is believed to be the site of the historic Strahan building, torn down more than half a century ago.

The parcel is being advertised on real estate websites with a listed price of $1.5 million.

Also on Monday’s agenda is an informational report or update on tax rates for hotel lodging versus short-term rentals.

A request for an extension of zoning approval for an Old Town property is on Monday’s agenda as well. The owner of Merkin Vineyards @ Old Town, formerly known as Galileo 33, wants to construct a winery, restaurant and tasting room at North Verde Heights Drive and Pima Street, and wants to convert three parcels from various residential and commercial statuses to Planned Area Development, or PAD.