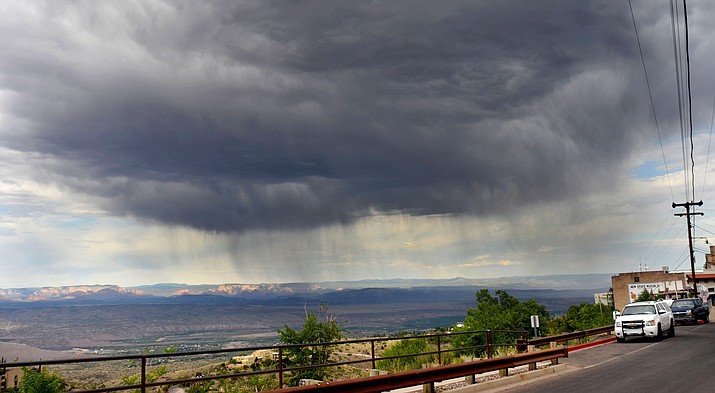 Jerome only got a few sprinkles as this monsoon seemed to keep north toward Sedona and Sycamore Canyon from a photo taken from Jerome Thursday afternoon. Residents in the Verde Valley are awaiting monsoon season as temperatures were over 100 degrees in Cottonwood again Saturday. VVN/Vyto Starinskas

A Burned Area Emergency Response team is assessing the condition of watersheds burned in the Woodbury Fire.

The purpose of the team, known as BAER, is to recognize and manage potential risks to resources on National Forest System lands and reduce these threats through appropriate emergency measures to protect human life and safety, property, and critical natural or cultural resources, according to a press release from the Tonto National Forest.

According to the press release, the next phase involves completing a “values-at-risk assessment” for the Woodbury Fire, which will determine and prioritize work within the fire area’s fifteen sub-watersheds.

“The next phase of work will involve modeling and analyzing data work before completing a report that will be given to Forest Service officials,” the press release stated.

Wildfire increases the potential for post-fire flooding, soil erosion, and debris flows that could impact recreational areas, homes, structures, roads, and other infrastructure within, adjacent to, and downstream from burned areas.

Residents and visitors should remain alert to possible flooding when traveling along roads downstream from the burned areas on the forest, the press release stated.

Everyone near and downstream from the Woodbury burned area should remain alert and stay updated on weather conditions that may result in heavy rains over the area.

Current weather and emergency notifications can be found at the National Weather Service, Phoenix website: weather.gov/psr/.

At 90% containment, the 123,875-acre Woodbury Fire should be fully contained by midnight July 15, according to InciWeb, an online incident information system.

The fire started at about 1:30 p.m. Saturday, June 8, approximately five miles northwest of Superior. It is still unknown the cause of the fire, according to InciWeb.