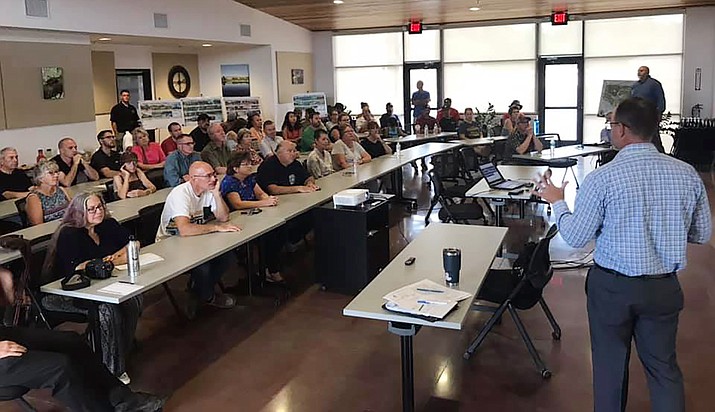 Brian Sager of Norris Design in Phoenix, bottom right, listens to feedback from one of the 80 people who attended Thursday's presentation of the Riverfront Park master plan. A grant-funded study was commissioned to learn what Cottonwood residents want to see added to their city's largest park in the years ahead. VVN/Jason W. Brooks

COTTONWOOD — Make no mistake — Cottonwood-area folks are passionate about what they want to add to their centerpiece park and how to space things out.

Never was that more evident than last Thursday, when, despite little advance publicity, a dinnertime presentation of a master plan for Riverfront Park drew 80 people into a meeting room in the park’s sewer treatment plant building for feedback.

The focus of planning has been on adding more to Riverfront Park, rather than modification or upgrading of existing facilities.

The presentation comes near the end of a yearlong, grant-funded process that is meant to give the city and nonprofits complex information going forward regarding what the public seeks to add and expand in its 77-acre park. In the months ahead, feedback from Thursday’s forum and others, along with survey data and an overview drawing will be presented to both the Parks and Recreation Commission and the Cottonwood City Council.

City Manager Ron Corbin said there is no funding budgeted for Fiscal 2020 to begin any of the more lengthy and expensive projects called for by the public at the park, nor is there likely to be any in FY 2021.

However, he said city staff will gladly meet with anyone who has specific details and plans for a phase or portion of the master plan, or knows ways the city can obtain sport-specific or industry-specific grants not generally on the radar of small municipalities.

“We don’t have any money,” Corbin said. “But if anyone has ideas or wants to help get into the details we can present, or knows ways we can partner with nonprofit, come talk to us.” 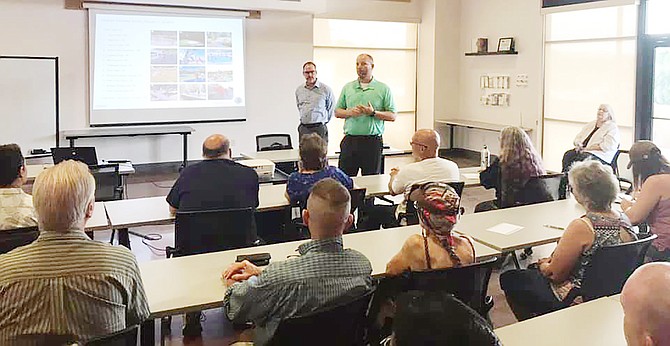 City of Cottonwood Recreation Services Supervisor Hezekiah Allen, right, along with Brian Sager of Norris Design in Phoenix, bottom right, listen to feedback from one of the 80 people who attended Thursday's presentation of the Riverfront Park master plan. A grant-funded study was commissioned to learn what Cottonwood residents want to see added to their city's largest park in the years ahead. VVN/Jason W. Brooks

The main purpose of the grant-funded study was to put together a large amount of community input and to notify the public of limitations, in order to work out a detailed master plan to use as a basis, going forward.

While some questions posed to Allen and Sager were about financing, and therefore didn’t have immediate answers, most of the discussions were about placement or inclusion of certain items or venues.

The focus did not include the elimination of any sport or venues, though some would have to be relocated and/or re-shaped by expansion. For example, the dog park would be retained, but moved much closer to the Verde River’s edge, maintaining both large-dog and “shy dog” areas along virtually the same square footage as its current footprint.

A splash park was discussed on the master plan, as was a kayak course. For environmental reasons, these must be placed away from the main flood plain of the river, which means other items would be moved closer.

Allen touted the amount of multi-purpose green space that would be allotted for small soccer fields in the park’s southwest corner. The fact the splash park would need to use drinkable, fresh, swimming-pool-quality water prompted a discussion about water availability itself; the kayak course and other uses in the park could use reclaimed water.

Proponents of several regular parked activities stumped for their stakeholders at the 90-minute meeting. For example, community garden users mentioned a 16-by-16-foot space is barely large enough, and it’s taken years to condition soil in the southwest corner, but questioned the need for so many parking spaces on the conceptual drawing.

Disc golf supporters mentioned how often they meet out-of-town players who travel great distances to use the course at the park.

Supporters and volunteers who have tried to help keep up the roller hockey rink pointed out how many age groups participate when the rink is in solid condition.

A couple of people asked why sand volleyball courts weren't eliminated, observing those aren't used as heavily as other aspects of the park currently.

There are two playgrounds currently in the master plan: a traditional one, and another with more modern equipment. There would be three new sets of restrooms to go along with two sets already in place.

Men’s softball players pointed out how a playground positioned near the outfield fence of one or more of the fields could pose a safety hazard from home-run balls.

In addition to a November meeting, in which 128 people participated and voiced support for adding certain elements, the Verde Independent also conducted a survey, in which voters could vote for three priorities, for a total of 2,754 votes.

A splash pad, roller skating/hockey, and multi-use green space or soccer fields both scored high at both the November meeting and in the Verde Independent poll.

The results of the Verde Independent poll can be found here: bit.ly/2XOg2yL

Sager and Allen emphasized the point that while having the plan together will be a selling point in attaining grants by itself, finding people who are really passionate and knowledgable about one or two park elements is a big key to obtaining grants as well.

“If you go to Arizona State Parks, with a specific plan, that makes a big difference,” Sager said.