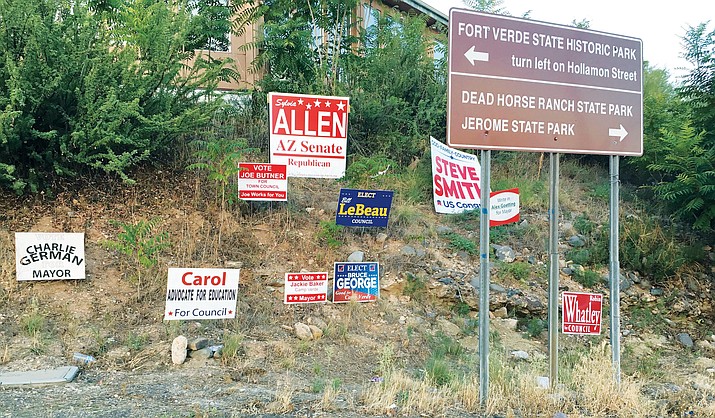 A key to a designation, according to the Camp Verde Council’s July 17 agenda packet, within a proposed resolution, would forbid the placement of temporary political signs in one zone.

CAMP VERDE – Camp Verde’s General Plan designates 10 character areas to help potential developers know where to build what they would like to build.

The plan, ratified by voters in 2016, does not define a commercial tourism zone.

Wednesday, council will consider a resolution that would designate Finnie Flat Road, Main Street and Montezuma Castle Highway from the Y-intersection to Black Bridge as a commercial tourism zone.

Key to the designation, according to council’s July 17 agenda packet, is that Resolution 2019-1020 would forbid the placement of temporary political signs in that zone.

Whether or not political signs should not be posted in certain areas, Community Development Director Carmen Howard said Monday, “is a philosophical question.”

At a March work session with Planning and Zoning, Councilor Joe Butner said that restricting the location of political signs “really bugs me.”

“I am opposed to the town regulating the placement of signs,” he said. “We should be celebrating elections and the political process. For the town to be interfering with that, we shouldn’t be doing that.”

In March, Howard told council in a work session of plans for an update to the codes.

Arizona Revised Statute 16-1019 says it’s a class 2 misdemeanor to remove, cover or alter in any way a political campaign sign.

But the statute says nothing about prohibiting such signs, Howard told council.

“More than anything else, this is about whether council wants [an official] say with political signs,” Howard said. “We’re not talking about private properties. We’re talking about the right of way.”

According to the statute’s subsection F, political signs cannot be placed within any municipality designated commercial tourism zone.

“With regard to the sign-free zones, municipal governing bodies may determine that, based on a predominance of commercial tourism, resort and hotel uses within certain areas, placement of political signs within the rights-of-way will detract from the scenic and aesthetic appeal to tourists,” the agenda packet states. “Two such contiguous zones may be designated, with a total area of not more than three square miles.”

At 6 p.m. Wednesday, council will hold a special session for the public to make comments about Camp Verde’s proposed fiscal year 2019-2020 budget.

The July 17 agendas can be found at campverde.az.gov.