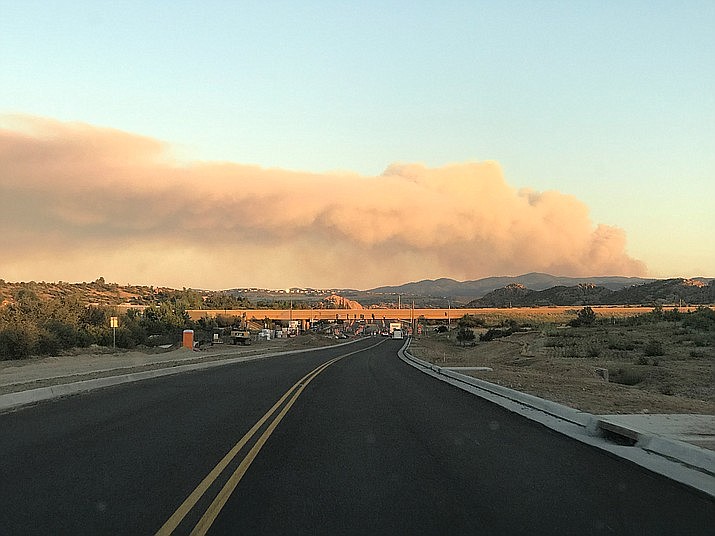 The Cellar Fire, located near Wagoner, has charred more than 1,000 acres as of Tuesday, July 16. The photo is taken from north Prescott near the Highway 89 and Highway 89A interchange. (Les Stukenberg/Courier) 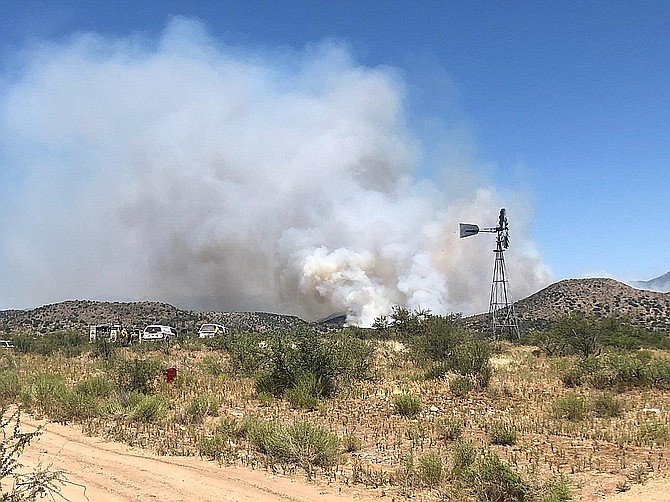 What started out as a small 5-acre fire started by lightning near Wagoner this past weekend grew to more than 8,000 acres by Tuesday evening, according to the Arizona Interagency Wildfire website.

"It's probably more than that," Prescott National Forest spokesperson Debbie Maneely said at the time in a phone interview Tuesday night. "We'll get a better idea tomorrow."

A tweet from the Prescott National Forest Service account said winds were pushing the fire to the north and east.

“Crews focused suppression efforts on both the north and west flanks of the fire today, constructing dozer and hand line,” Maneely said in a statement. “Burnout operations to reinforce the effectiveness of the constructed lines occurred and will continue this week as conditions allow.”

To protect firefighters and emergency responders, road closures will be implemented on the Bradshaw Ranger District. 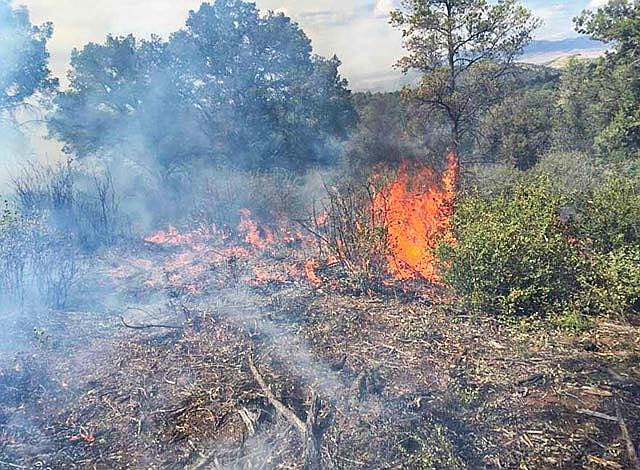 On the afternoon of July 10, the Mulch Fire smoke was reported by the Apache Maid lookout. First responders found a large pile of grass and vegetation clippings in the Camp Verde Transfer Station, according to InciWeb, an online incident information system.

The pile of green waste, according to InciWeb, is expected to smolder for several weeks.

Smoke can be seen by motorist on I-17 could also impact SR 260, especially overnight as it settles in cooler temperatures, according to InciWeb.

According to InciWeb, approximately 15 wildland firefighters have been assigned to the fire and “are using engines, water tenders, a dozer and an excavator to move the debris around so it can be extinguished.”

A sprinkler system has also been set up over the fire to reduce the risk of spot fires into other piles at the transfer station, according to InciWeb.

The cause of the fire is still under investigation.

CROWN KING – Firefighters reported that the Castle Creek Fire received moisture on Monday afternoon and into the early evening.

The 100-acre fire, burning approximately six miles east of the community of Crown King in the Castle Creek Wilderness, has not grown in size with no visible smoke, according to a press release from the Prescott National Forest.

The fire’s location, conditions on the ground, and weather, including predicted monsoonal moisture is providing the opportunity to use this natural ignition to restore fire to the landscape and achieve multiple resource benefits, including improving forest health and habitat diversity, the press release stated.

Early season monitoring revealed that the peregrines had returned to their nest site on Granite Mountain while the status of peregrines at Thumb Butte was unknown.

Peregrine falcon conservation in Arizona is being led by the Arizona Game and Fish Department in conjunction with the land managing agencies where peregrines nest, the press release stated.

Firefighters will begin burnout operations today on the 275-acre Newman Fire, which includes ignitions on the ground in coordination with aerial ignitions to secure control lines along the planned fire perimeter.

The fire was first reported July 11 and is believed to be caused by lightning, according to a Coconino National Forest report. The fire is located about 15 miles southeast of Flagstaff.

Burnout operations are expected to continue through Thursday as weather conditions allow, and the public can expect to see a significant increase in smoke as these ignitions are carried out.

Fire managers will reduce the overall duration of smoke impacts to the community by completing burnout operations over the span of a few days instead of a span of a few weeks.

The Narrows day-use area and Lake View Campground have been closed temporarily due to expected heavy smoke impacts. The immediate fire area remains closed for public health and safety. A larger area closure is expected mid-week as burnout operations continue.

The public should use extreme caution when recreating or driving along Lake Mary corridor and any roads adjacent to the fire area.

Firefighters work to contain two Gila National Forest fires which according to the forest’s website have consumed nearly 3,100 acres.

According to a press release from the Gila National Forest, the South Fire and Rocky Fire are lightning-caused and burning on National Forest System lands in the Aldo Leopold Wilderness on the far eastern edge of Arizona.

“Helicopter reconnaissance shows that these naturally-ignited fires are doing good things for the land,” the press release stated. “They are exhibiting low to moderate fire behavior. These fires will enhance the land’s ability to support the natural role of fire.”

The release also stated that fire management officers will continue to look at management opportunities to direct the fire around values we want to protect.

Smoke from fire rises during the daytime, but in the evening can pool down in canyons, drainages, and basins.

For information on air quality and protecting your health, and to find guidance on distances and visibility, visit nmtracking.org/fire.

Smoke monitors are set up at the Gila Center, in Winston and Mimbres.

Live tracking can be found at app.airsis.com/USFS/UnitMap for smoke monitor units USFS1054, USFS1035, and USFS1036. Fire information can be found at NM Fire Info and Inciweb.

For information on the Gila National Forest, visit fs.usda.gov/gila or join the conversation on Facebook and Twitter.

Also to the north, the 50-acre Castle Fire on the North Kaibab Ranger District of the Kaibab National Forest grew slowly but steadily yesterday while wildland fire crews prepared boundary roads and other potential control lines for the fire's likely growth.

The Kaibab National Forest plans to allow the lightning-caused Castle Fire to continue growing within a defined area in order to fulfill its natural role of reducing dense forest fuels and improving overall ecosystem health.

The wildfire, which was discovered July 12, is located about 11 miles south of Jacob Lake, 3 miles west of Highway 67, and just east of Forest Road 761 near Oquer Canyon on the North Kaibab Ranger District of the Kaibab National Forest.

With warm, dry and windy conditions predicted over the next several days, fire managers expect the Castle Fire to continue its slow and steady growth. Wildland fire crews will be working to secure designated perimeters within which the fire can move, including burning out when necessary to consume fuel between the edge of the fire and control lines.