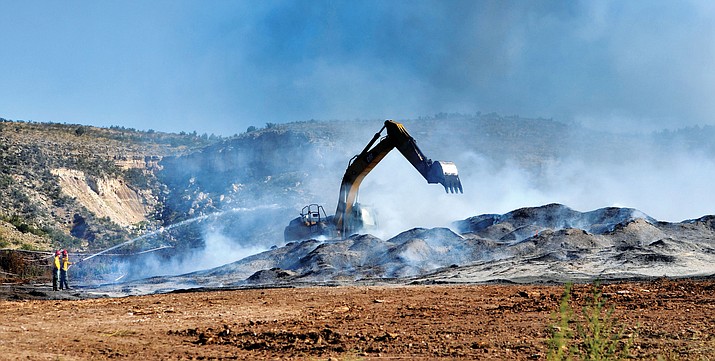 “Spontaneous combustion” of green materials most likely ignited the bellowing fire at the Yavapai County Camp Verde Transfer Station fire which can be seen from all over the Verde Valley. The transfers station reopened to take trash and tires on Tuesday, but is not taking yard waste or brush. Read the full story in Thursday's Verde Independent. It will burn for another week or two, VVN/Vyto Starinskas

CAMP VERDE -- Spontaneous combustion of green materials most likely ignited the fire whose billowing smoke can be seen from all over the Verde Valley.

The Yavapai County Camp Verde Transfer Station reopened Tuesday to take trash and tires, but is not taking yard waste or brush.

Ironically, some of the mulch pile is from homeowners clearing brush and branches off property to be fire-wise and stop the spread of wildfires.

Fire crews from the Coconino and Prescott National Forest have been rotating fire trucks and spraying water on the much pile during the past eight days, according to Bryor Nittmann, a firefighter with the U.S. Forest Service.

Yavapai County Public work crews are also at the scene using heavy machinery to break up the perimeter of the mulch pile where a second area was heating up, Nittmann said.

The Forest Service officer said he believes it was spontaneous combustion that started the green material on fire in the mulch pile.

He said the county had been building up a large mulch pile at the Camp Verde transfer station during its free dumping days.

The hot weather starts to heat up green material, then it decomposes, heats up more and can make a fire, he said.

“This kind of fire will continue smoldering for a long time,” Garrison said.

Nittmann said the burning pile was about an acre in size and about 20 feet tall when it started. Now it’s spread out wider, but it’s knocked down.

“There have been about 10 and 15 firefighters at the scene at a time at the transfer station fire, but they have had to downsize the operation with the nearby Cellar Fire in Prescott. We keep rotating engines in and out,” said Nittmann.

The smoke from the transfer station is diminishing, but it will continue burning “potentially another eight to 10 days,” he estimated.