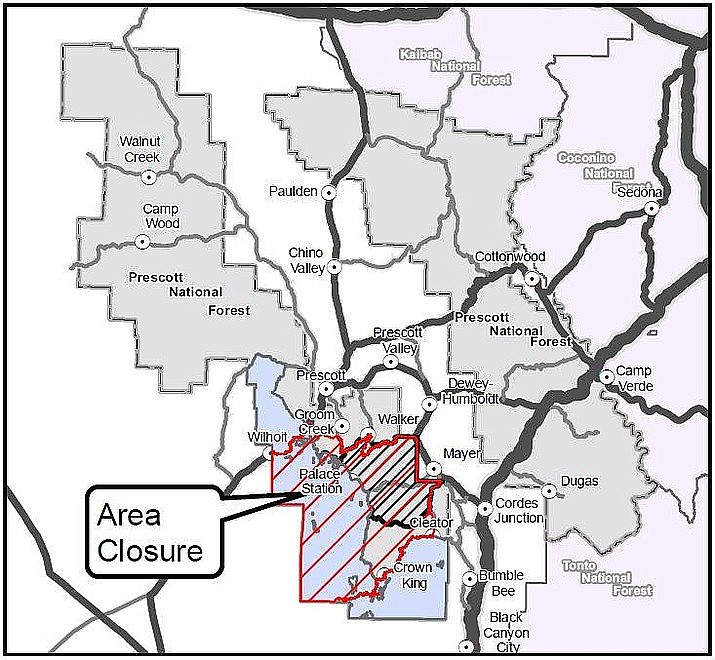 A fire closure order went into effect Thursday morning, July 18. It includes everything south of Wolf Creek including Potato Patch, south to the community of Crown King, which remains open for business. Courtesy of Prescott National Forest.

Additional firefighters are arriving as well to fight the blaze, which was at about 6,450 acres and 0% contained Thursday morning, officials with the Prescott National Forest (PNF) said in a news release.

“Firefighters are actively engaged in fully suppressing the fire where they can do so safely and effectively,” PNF spokesperson Debbie Maneely said in the release. “This includes protecting values at risk including private property and infrastructure in and around Pine Flats, Potato Patch, Wolf Creek, Groom Creek, Indian Creek Walker and Crown King.”

There are still no evacuations currently in effect. As a precaution, the Yavapai County Sheriff’s Office (YCSO) has issued a Code Red ‘SET’ for the community of Pine Flat; and a Code Red ‘READY’ for the communities of Walker, Groom Creek, Wolf Creek, Potato Patch, Indian Creek and Crown King.

For information on the Code Red alerts, go to the YCSO Facebook page at www.facebook.com/YavapaiCountySheriff or call 928-771-3321.

Detailed information and a map are available on Inciweb at https://inciweb.nwcg.gov/incident/6443.

As a reminder to the public, wildfires are a No Drone Zone.

“If you fly, we can’t,” Maneely said in the release. “Every time a drone is spotted near the fire all aircraft are grounded until we can be sure the drone is clear of this area.”

American Sign Language (ASL) and Communication Access Realtime Translation (CART) services will be provided. Officials plan to livestreamed the meeting on Facebook at www.facebook.com/PrescottNF and the recording will be posted after the meeting is over. If the livestream doesn’t work or the connection is lost, highlights will be posted along with the recording afterward. No Facebook account is required to view the video.

The Yavapai County Emergency Management office has activated the emergency phone bank to answer questions about the Cellar Fire.