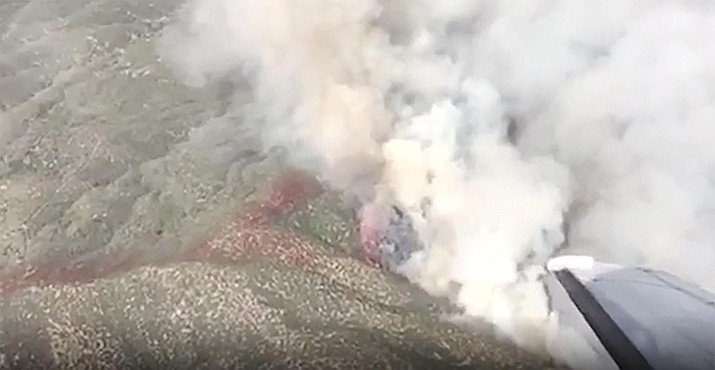 The Cellar Fire, burning south of Prescott, doesn’t appear to be slowing down. This image was taken late Thursday, July 18.

PRESCOTT -- The Cellar Fire, burning south of Prescott, doesn’t appear to be slowing down.

With temperatures reaching as high as 89 degrees, no precipitation and winds gusting at about 14 mph, fire officials expect another active day for the blaze, which was at about 7,300 acres by 9:30 a.m., according to a PNF news release.

Hotshot crews are continuing to construct fireline directly along the fire’s edge on the northwest side of the fire, Debbie Maneely with PNF said in the release.

They have constructed line from the southwest corner of the fire and have made their way northeast to the Deer Spring area. They are continuing to make their way to the northeast to help create a fireline to help protect communities and infrastructure farther north of the fire.

Fire crews and equipment are clearing brush 60 feet deep along Forest Road 52 (Senator Highway) on the east side of the fire, Maneely said. They hope the windy, dirt road will serve as a fireline to help limit the fire’s spread.

Here's aerial footage from the fire:

Thursday afternoon the Yavapai County Sheriff’s Office (YCSO) issued a Code Red ‘GO’ mandatory evacuation for the residents located in Pine Flat. That evacuation notice remains in place and a shelter has been set up at Prescott High School. For information about the evacuation, call 928-771-3260.

There is the potential for heavier smoke impacts into the weekend, Maneely said. Daily smoke outlooks are being posted to the Central Arizona Smoke Outlook at https://wildlandfiresmoke.net/outlooks/CentralArizona.

“Firefighters will continue to actively engage in fully suppressing the fire where they can do so safely and effectively,” Maneely said. “This includes protecting values at risk, including private property and infrastructure in and around Pine Flats, Potato Patch, Wolf Creek, Groom Creek, Indian Creek Walker and Crown King.”

As of Friday morning, there are 367 personnel working the fire.

Daily video updates on the fire’s status are being posted on Facebook at www.facebook.com/PrescottNF.