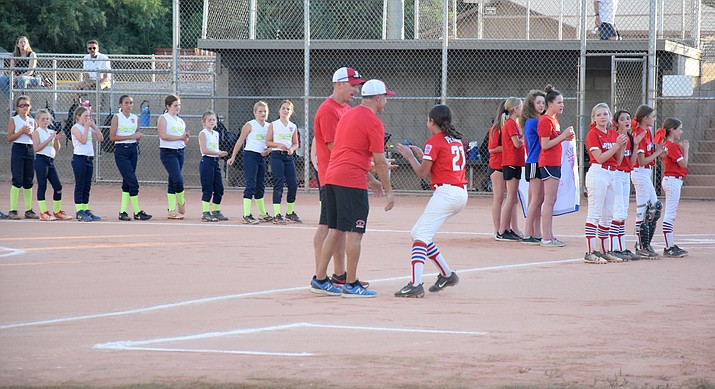 Covering Camp Verde High School sports in the spring was a treat but there was one aspect that left a bad taste in my mouth.

On the positive side, the Cowboy softball team won the state championship and the baseball team reached the final four. However, the AIA’s mishandling of it made it rather awkward.

It wasn’t terrible, but they had both of those teams playing at the same time — insert face palm emoji. Then on top of that the baseball tournament was way out in Goodyear, so going to both was quite the chore.

Then when you got to Goodyear the parking situation was a mess because they have so many games there and the spring training facility that they play at wasn’t designed for a bunch of fans. So after the long drive from the main part of the Valley of the Sun where softball played, the quest to find parking and the hike to the fields, you have to find out the score and the inning.

The 2A state tournament doesn’t feel big time at all. I remember thinking this is like Little League, having to ask around what the score is but then once the Little League district tournament in Cottonwood started I realized it’s not — they had a scoreboard.

Even though I’m sure most of the people associated with Arizona high school baseball did play Little League in the Grand Canyon State, there’s a lot they can learn from Little League.

First of all, obviously get scoreboards. Splurge and go to Dick’s Sporting Goods and drop $10 or $15 or whatever and get one of those plastic flip scoreboards.

Next, they should adopt the Little League policy of rotating the state tournament. This year the LL tournaments are or were in Tempe, Flagstaff, Kingman, Tucson, Sierra Vista, Payson, Cottonwood and Avondale.

Except for early games of the bigger school tournaments, all the high school state tournament games are in the Phoenix area. Instead of rewarding players, coaches, fans, teachers, other employees and family with a chance to deal with the Phoenix traffic and heat why not have state tournaments that represent the whole state?

Having games in the spring training stadiums makes sense but does anyone really want to play on their practice fields? The first three rounds of the 2A state tournament were at the practice fields and it just feels like the small school tournaments are an after though.

It’s a lot more fun to drive to Goodyear when it’s to play in the stadium and not just to play on the practice fields that have hardly any seating.

I feel like one of the big, important aspects of high school is learning, so what about teaching kids about other parts of the state? Obviously everyone in Arizona is familiar with Phoenix but if you had the state tournaments rotate then the student athletes could see different parts of the state.

I hadn’t heard of Prescott or Kingman until college and hadn’t heard of Cottonwood until I saw my position open. On the other side, my mom’s side of the family lived in Sierra Vista and as an army brat my dad went to high school there.

After Verde Valley Little League won the district tournament I overheard a couple parents ask each other about going to “Sierra Verde.” Thanks to the Little League state tournament they now are familiar with Sierra Vista.

A state tournament played here would familiarize other Arizonans with our unique place name pronunciations and they can learn about how much we suffer with the roundabout pandemic here in Northern Arizona.

Now, some aspects about playing in the Phoenix area make sense, it’s centrally located, it’s one of the bigger cities in the country but not every sport plays their state tournament there. Even though it has a pretty high elevation and wrestling is a winter sport the wrestling tournament is in Prescott Valley, along with some of the basketball state.

I’m not saying they should move the wrestling tournament (though it is odd that the AIA has winter sports state tournaments in cold places and spring in hot places but whatever), it’s a great venue for it. Having the tournament at the NAZ Suns arena fits it well, they should find venues that fit for the baseball tournaments.

Imagine if they rotated it and one year it’s in Verde Valley/Sedona. It would be more a vacation than going to whereever there’s room for them in the Phoenix area, like how the current 2A tournament feels.

It would be a boost to local businesses, at the start of the softball state tournament in Cottonwood I saw a bunch of Little Leaguers on the Old Town road. Phoenix doesn’t need any of our money.

Really the only perk I see in having the tournaments at the spring training facilities are that they have a lot of fields but in the rotation plan multiple schools (or parks) would host. Like there could be games at Camp Verde, Mingus Union and Sedona and in cooler places you can schedule more than two games in one day at a site, unlike Phoenix.

Plus that way parking wouldn’t be so bad. Sure you can’t scout the other teams if they’re playing in Sedona and you’re in Camp Verde but many of the games are at the same time currently anyway.