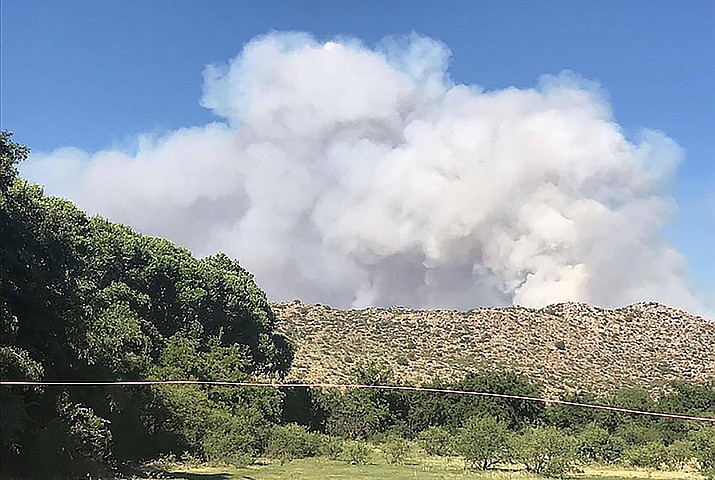 Cloudy skies and higher humidity on Friday combined to help firefighters improve containment of the Cellar Fire south of Prescott. Courtesy of The Daily Courier

Cloudy skies and higher humidity on Friday combined to help firefighters improve containment of the Cellar Fire south of Prescott.

The fire was at about 7,400 acres and 18 percent contained on Friday evening, the Prescott National Forest (PNF) reported.

Crews were able to hold the fire’s progress along the south and southwest perimeter. Little activity was reported on the east side, but retardant from airtankers kept the fire from moving, a PNF release stated. Dozers worked to create a fire line as terrain allowed on the north end near Longfellow Springs.

The crews also continued to make good progress building a fireline along the west and northwest side of the fire.

A total of 594 fire personnel were battling the blaze, including 10 Hot Shot Crews, six Type 2 IA Crews, one Type 2 Crew, two dozers, and 18 fire engines, according to the release.

Fire crews were working on structure protection at Palace Station overnight and monitoring hots spots along the Senator Highway on the east side of the fire down to Shady Dells. Cloud cover was expected to keep heat over the fire, but little fire activity was expected.

The potential for heavier smoke impacts exist into the weekend. Daily smoke outlooks are being posted to the Central Arizona Smoke Outlook at wildlandfiresmoke.net/outlooks/CentralArizona.

An interactive Cellar Fire Map is available at tinyurl.com/CellarFireMap.

The meeting is scheduled to be livestream on Facebook at www.facebook.com/PrescottNF/ and the recording will be posted after the meeting is over. If organizers are unable to livestream or lose the connection, they will record the meeting and post highlights afterwards. No Facebook account is required to view the video.

On Thursday afternoon, the Yavapai County Sheriff’s Office issued a Code Red “GO” mandatory evacuation for the residents located in Pine Flat. A shelter has been set up at the Prescott High School.

For information on Code Red alerts, visit the Yavapai County Sheriff’s Office Facebook at www.facebook.com/YavapaiCountySheriff/ or call 928-771-3321 from 7 a.m. to 7 p.m.

JACOB LAKE – The Castle Fire has grown to 200 acres as it continues to clean up downed, woody debris and improve overall forest health.

That’s what a July 18 press release from the Kaibab National Forest had to say about the fire, which was discovered on July 12 about 11 miles south of Jacob Lake.

Gradual growth of the lightning-caused fire is anticipated over the coming days, the release stated, as dry conditions persist.

The Kaibab National Forest is part of a fire-adapted ecosystem and is dependent on fire to play a natural role in maintaining forest health, the release stated.

Kaibab National Forest has not announced a planned end date for the wildfire. But forest managers have established a planning area within which it will be allowed to grow over the coming weeks, according to the release. “This does not mean that the wildfire will move across the entire planning area, as weather conditions and terrain features will impact long-term activity and growth.”

The Castle Fire poses no danger to structures or other local infrastructure, the release stated. “However, smoke is likely to become more visible over the coming days as the fire spreads within the defined planning area.”

FLAGSTAFF – Weather conditions allowed for successful aerial ignitions on the Newman Fire on Wednesday, as burnout operations secured control lines along the south and southwest shoreline of Lake Mary.

According to a press release from the Incident Information System Inciweb, fire managers will continue to monitor fire behavior and weather conditions. Proactive burnout operations will also continue “if conditions remain favorable to secure the perimeter and increase the strength of control lines.”

Crews will be actively patrolling the fire’s edge to ensure all fire remains within the predetermined planning area, the release stated.

“The public should use extreme caution when recreating or driving along Lake Mary corridor and any roads adjacent to the fire area,” according to a Coconino National Forest press release.

The Newman Fire was discovered on July 11 approximately 15 miles southeast of Flagstaff.