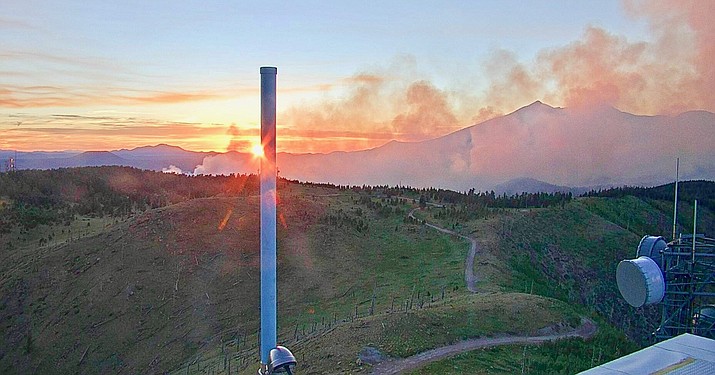 The Museum Fire, burning in the Flagstaff area can be seen all over northern Arizona. Evacuation notices for Coconino National Forest roads north of Flagstaff were issued Sunday. A Type 1 Incident Management Team is due to arrive Monday at the blaze, which had quickly burned 400 acres by Sunday night. Courtesy of U.S. Forest Service

FLAGSTAFF, Ariz. — Due to the complexity of the Museum Fire and additional resources needed, a Type 1 Incident Management Team has been ordered and is scheduled to arrive tomorrow for in-briefing and assume command of the fire.

The Southwest Area Incident Management Team #2 (IMT), led by Incident Commander Rich Nieto, is set to arrive Monday afternoon and is planning to take over management of the fire at approximately 6 p.m.

The Museum Fire, located about a mile north of Flagstaff, was reported at about 5 acres at 10:53 a.m. Sunday morning. The fire has grown quickly and is currently estimated Sunday night at 400 acres, receiving some national media attention.

Smoke will be visible from Flagstaff and many other northern Arizona communities, including those in the Verde Valley. 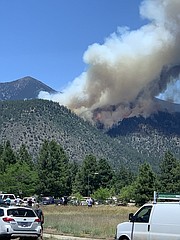 The Museum Fire, burning in the Flagstaff area can be seen all over northern Arizona. Evacuation notices for Coconino National Forest roads north of Flagstaff were issued Sunday.

The public should use extreme caution when driving on U.S. Highways 180 and 89 north of Flagstaff as firefighting vehicles, personnel, and equipment will frequently be using those roads as they fight the fire.

Evacuation information is handled by Coconino County Emergency Management and conducted by the Sheriff's Office.

Firefighters are planning to conduct burnout ops Sunday night in an area btwn Mt Elden Lookout Road (Forest Road 557) and the southern portion of Brookbank Trail. Fire from these ignitions will be very visible tonight and are part of the efforts being used to battle the #MuseumFire.

Updates about the Museum Fire, acreage, and latest activity can be found on Inciweb, and quick updates will be posted on the Coconino National Forest Twitter and Facebook social media sites.

A pre-evacuation notice was also been issued for the area of Forest Road 420 to Friedlein Prairie.

As the IMT arrives, they will assume responsibilities of keeping the public and media informed about the Museum Fire, and an update will be sent out regarding contact information for the IMT's public information office.

"Thank you for your dedicated efforts," Ducey told fire and forest personnel. "We will continue to monitor the situation and deploy additional resources as necessary. Arizonans and visitors in the area should be ready to respond to any evacuation notices.”