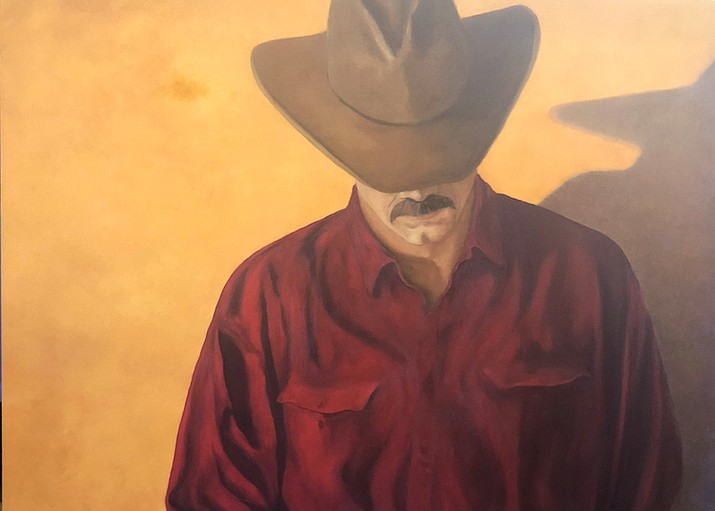 Grab your boots and hat, and head out to Goldenstein Gallery Saturday and Sunday, July 27-28, for their celebration of the National Day of the Cowboy.

This weekend Goldenstein Gallery honors the legacy of the American Cowboy through the vision of their artists who capture the essence of this iconic spirit in their work.

It is the cherished heritage of the American West and the archetypal spirit of the heroes that captivated painter David DeVary and inspired him to create his acclaimed quintessential series “Cowboys and Cowgirls with Attitude.”

DeVary paints introspective, idealized and sometimes, provocative figures, capturing and combining the good feelings associated with the western legend and the American Dream.

His use of bright yellow slickers, often black hats that shield the eyes, worn, antique chaps and the cowboy’s own natural body language helps create a striking, unique, almost ethereal portrait of the American cowboy and cowgirl. He recognizes them as American icons and paints them as such using gold, silver or copper leaf, much like the icon painters of old.

This contemporary work captures the values of the West with interest, beauty and sense of good being. He says of his work “I’m not painting history; rather, I’m trying to capture the feeling, strength or confidence of the American West. Like the traditional Western artist, I’m fascinated with this romanticized, idealistic West.”

Pieces from his “Cowboys and Cowgirls with Attitude” series have been featured in over a dozen Museum Exhibitions and permanently on display at: Rockwell Museum of Western Art, Corning, New York; Booth Western Art Museum, Georgie; Denver Art Museum, Colorado.

A Sedona-Verde Valley native, Cheston Trammel’s work is profoundly influenced by his early environment and his connection to the land around him. His stunning series of sculptural reclaimed metal bells have resonant tones and captures the essence of the high desert that he loves with interesting and surprising found metal elements.

Multifaceted, he also creates one of a kind furniture pieces from native woods such as ancient Alligator and Shaggy Bark Juniper. “If these pieces could talk they could tell us the stories of past centuries,” says Trammel.

The Juniper is valued for its rich abstract grain patterns and golden highlights in which he often inlays turquoise and other elements for added beauty and interest.

Collectors from around the globe have Trammel’s pieces in their collections. His work captures his avid love of the outdoors and reflects his interpretation of the profound interconnection that is woven throughout nature.

Some might say the era of the cowboy has passed, but we know it is alive and well. It is one of the American archetypes, the hero that lives in each and every one of us.

Join Goldenstein Gallery Friday- Sunday, July 26-28, as they celebrate and honor those artists who made the West as we know it, through the vision.

In addition to DeVary, this weekend Goldenstein Gallery will also feature special pricing the fine Juniper furniture and sculpted bells of Cheston Trammel created from found objects from AZ history.