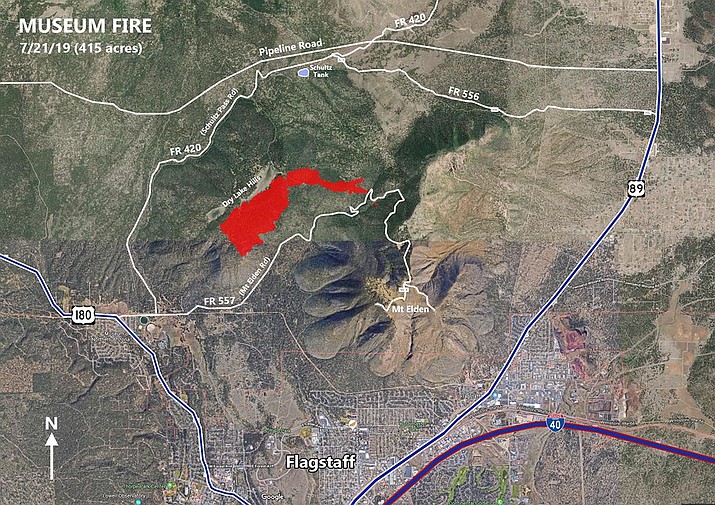 An estimated 600 additional acres have burned since this map was created by the U.S. Forest Service. Several Flagstaff-area neighborhoods have been placed on "evacuation SET" status.

Some neighborhoods in the northeast part of the Flagstaff area were added to the “Set” stage (pre-evacuation) stage early Monday afternoon as a result of what's being called the "Museum" mountaintop fire.

Areas west of Highway 89, from Railhead north to Townsend-Winona, including the KOA Campground, Christmas Tree Estates and the U.S. Forest Service Peaks Ranger Station Office are in this status.

The U.S. Forest Service conducted an aerial assessment of the fire this morning, and, due to the growth of the fire, the Coconino County Sheriff’s Office, determined it was necessary to put the Flagstaff neighborhoods on “Set” (pre-evacuation).

According to the Forest Service, the Fire is currently about 1,000 acres strong, and was very active overnight. Crews were not able to conduct burnout operations due to the activity and the fire spotting ahead of itself but took indirect suppression tactics where they could.

Other areas that continue to be under “Set” (pre-evacuation) are the areas of Mt. Elden Lookout Estates, north and west of Hwy 89 and Silver Saddle, Hutcheson Acres, McCann Estates all of Timberline communities including, Little Elden Springs, Black Bill Park, Wupatki Trails and Pine Mountain Estates.

Residents are asked to pack any emergency items, have resources to sustain for 72-hours, know how to receive and stay aware of the latest news and information on the fire from local media and community resources.

Coconino County Sheriff, Flagstaff Police and other Law Enforcement personnel will be going through these neighborhoods to let people know of the “Set” stage and to be ready for future evacuation orders. All Flagstaff residents should be in “Ready” stage.

People are also encouraged to sign-up for emergency notifications for evacuation and other notices at coconino.az.gov/ready.

Drones of any kind are prohibited from flying over the area. When an unidentified aircraft, manned or unmanned, is sighted in the fire area, all air operations must shut down immediately.