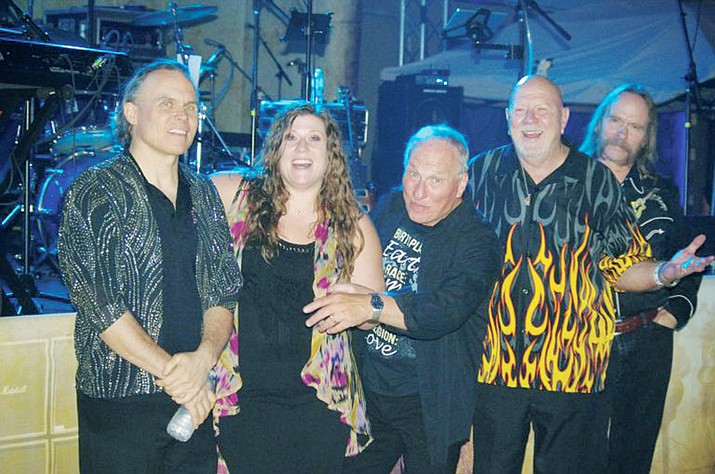 The Big Zephyr Country Band which plays a great mix of hit Country music you will recognize from all eras will be live in the Celebrity Show Room at Sound Bites Grill.

Saturday, July 27, is National Day of the Cowboy. Sound Bites Grill in Uptown Sedona and the Hyatt Pinon Pointe Shops will celebrate with some fun festivities to enjoy.

The entertainment restaurant will smoke meats in the Hyatt Shops Plaza during the day and will bring in a country-western dance band that evening. Rock till you drop with The Big Zephyr Saturday, July 27, 7-10 p.m.

National Day of the Cowboy is observed annually on the fourth Saturday in July. The era of the cowboy began after the Civil War in the heart of Texas. This day is set aside to celebrate the contributions of the Cowboy and Cowgirl to America’s culture and heritage. Currently, 11 states recognize this day. The first celebration was in 2005.

Sedona has celebrated this day for many years with many of the merchants uptown participating in fun events. Sound Bites Grill and a few of the stores in the Hyatt Pinon Pointe Shopping Center will be offering Cowboy themed festivities.

During the day there will be a smoker out front for your enjoyment of some barbecue. In the evening, The Big Zephyr country band, which plays a great mix of hit country music from all eras, will be live in the Celebrity Show Room at Sound Bites Grill. The band is based in Phoenix and is headed up by Bill Babin.

Born and raised in New Orleans, Bill began playing drums in the early 1960s. Strongly influenced by The Beatles and the rest of the British Invasion, he soon found himself in a garage band.

Babin continues to focus his passionate desire as a drummer into highly-skilled expression. His favorite drummers are Ringo Starr, Don Brewer, John Bonham, and every drummer that’s played with Steely Dan.

Jaime Lee Frank is the powerhouse lead vocals and energy of stage who creates a dynamic performance at any venue. Jaime Lee grew up in rural Minnesota listening to female country greats such as Patsy Cline, Linda Ronstadt, Trisha Yearwood and Reba McEntire.

Her first taste of the stage was at just 7 years old, and since then it has become her favorite place to be. She has a double BA in Music Education and Elementary Education and is a Choir teacher in the valley. Jaime Lee enjoys teaching and loves her students, but she says her “true passion is performing in front of the crowd.”

Russ Edwards began playing at the ripe old age of 5 beginning on drums at the direction of his father who played in a local country-western band in El Paso, Texas. At 7, he picked up the guitar from a friend who showed him the basics and formed a band playing bass guitar. Along the way he took the usual grade school piano, clarinet and violin lessons.

At 12, he moved to Arizona and formed a band with two fellow classmates in junior high, playing guitar and keyboards. After graduating high school he joined another band of fellow classmates and ended up touring the mid-west club circuit for close to five years with Big Zephyr bassist,Mike Edwards.

Mike Edwards is the bass player for The Big Zephyr and helps with back-up and a few lead vocals. Mike’s first and most prominent bass-playing influences ranged from the Beatles, Stones, and early R&B to Blues and every form of rock and roll in between, with heavy emphasis by early blues rockers such as Savoy Brown, John Mayall, Paul Butterfield, Eric Clapton and Delbert McClinton. Black Sabbath, Deep Purple and Led Zeppelin were his early “metal” heroes.

Mike has played in several local bands since those “road” days and kept pace with whatever people want to hear when they want to dance and listen to music.

He even played 2 1/2 years of country and oldies in a three-piece band called “Fly by Night,” further enhancing his ability to play other musical genres.

Playing in Bill Babin’s Big Zephyr has opened up a whole new and exciting opportunity to play with other very talented musicians and is the beginning of a new era for Mike’s musical horizons.

Russ Noble is the pianist and his talent and scope as a piano player are vast. He discovered his grandma’s piano at age eight and then took lessons for many years. Throughout high school, he continued his musical studies and participated in marching band as well as all-state programs. He started college as a music major, and almost went on a church mission, but joined a rock band instead, and his rock and roll career had begun

Enjoy this five-piece country band Saturday July 27th after a day in Sedona. The doors open at 5:30 and the band starts at 7 p.m. There is a cover charge for the band of $15 per person.

Sound Bites Grill is located at the Hyatt Pinon Pointe Shops in Uptown Sedona. For more information and reservations call 928-282-2713 or visit SoundBitesGrill.com

• What: National Day of the Cowboy Celebration