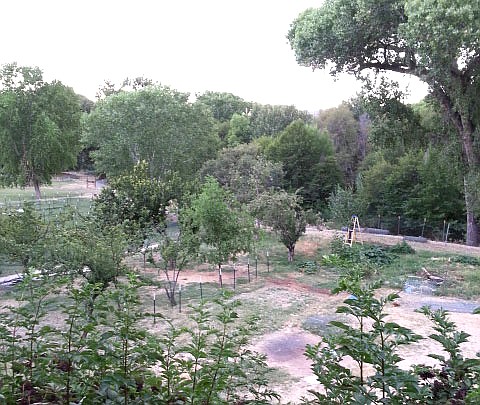 I know, I know. I mentioned I was installing new fences last week, but with the chaos of that day, I didn't really appreciate what I'd managed to make happen. Now that a week has passed, I think...I hope...no, I'm certain this was exactly what I always wanted. The fence appears to be tight enough to prevent a cow from walking through it or for a pig to tear it up. Although there's no way to prevent the chickens from flying over--for some reason clipping their wings never works for me--they can't get under it. Or rather, they won't be able to get under it when I'm finished closing all the gaps they've showed me. But what it has done perfectly is keep my new puppies where they belong, down in the pastures with the animals they're supposed to be guarding.

What I love most about this whole thing is that there is no longer a ridiculous 10 foot-tall chain link fence around my orchard.

When I first arrived here what had once been an orchard had a five-foot-tall chain link fence around it. That most of the trees were dead made a fence sort of redundant. Rather than remove the fence when I should have, I instead saved three apricots, two apples, three plums and a pluot. Today, the apples still look pretty gnarly, but that may be because they're simply at the end of their lives, and I've added way too many apricots plus a jujube. This winter I want to add some hazelnuts, and maybe more cherries. Definitely cherries!

It was that fence that resulted in me putting my first chicken coops in the orchard. This was in my pre-dog period, when I was fool enough to believe a fence could keep chickens safe from predators. Needless to say neither the coyotes nor the bobcat were deterred by a five foot leap. So even more foolishly I added another five feet to the fence. In my naivete (and general ignorance of predatory behavior), I was convinced this would do the trick.

Yeah, right. So not only did I create an eyesore with a ridiculously tall fence, I spent a small fortune to do it, and it didn't even slow down the hunting cats. Or the raccoons, nasty, bird-killing critters that they are. Expensive lesson learned and long since regretted.

Last week, while I was shuttling Moosie to the vet, that fence finally came down, at least on the front three sides of the orchard. This has created a new open, airy space from the back of the orchard to the front barn. Give me another year or two and that space will be planted the way I originally wanted--with boxed, raised rows set with PVC hoops for freeze cloth or floating row cover, or bird netting to keep out the occasional marauding chicken.

The back of the orchard fence remains in place, shortened to its original five feet. Extending from either end of the chain link are lines of beautiful, tight, four-foot-high horse fencing all the way to the turkey barn. There are gates, salvaged from my many other fencing endeavors, here and there so I can come and go with ease. It's my job to cover each of the gates with handy panels, my favorite building material, although I'm not using one u-bolt or a bit of baling twine to do this job. Instead, I bought myself a 24" bolt cutter so I can custom-size a panel to fit each gate. I've learned that I can bend the metal ends of the panel so it hangs on the top pipe of a gate. Once it's in place, it's easy to wire it to the sides so it can't be shifted or lifted. If I'm careful with my measuring, not even the most slender of my chickens can get through it.

But wait, there's more! I also had lines of fencing installed to separate the front three pastures. For the first time ever, I can put the sheep in one pasture and keep them there until they've grazed the area to my satisfaction. Even more importantly, I can make Bear stay with the sheep he's supposed to guard. And, once I've finished the last gates, I'll be able to put the puppies in with him wherever he is so they can learn their new jobs. 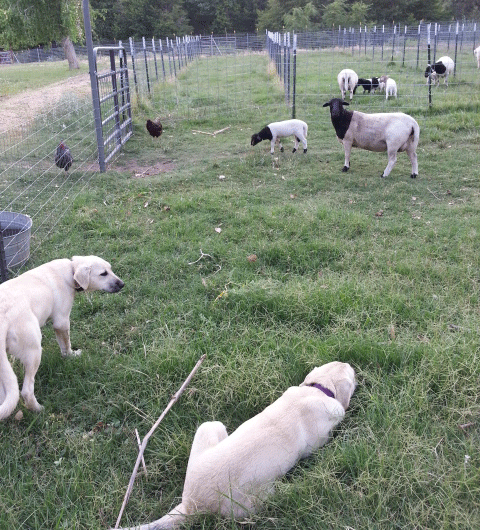 Why not include Moosie with the other dogs? Because there's not a fence in the world that can keep Moosie where he doesn't want to be. Even gimpy, he'll get over it or dig under it, or swim around a barrier. He's already taught the pups to dig. I don't want him teaching them any more tricks they don't need to know since they've already proved themselves pretty tricky when it comes to escaping containment. I am happy to report that there hasn't been a puppy on the porch since I finished lining the gates in the perimeter fence. What a blessing that is! I no longer have to worry that they might escape to the road before I know they're free.

After all, the less time I spend chasing them down to put them back where they belong, the more time I have to work with them. And work it is. Although I have no question they'll become really good livestock guardians, read the description of their breed, and you'll understand my exhaustion:

Profusely muscled but nimble afoot, Anatolians are more than a match for the predators and harsh terrain of their homeland. They are smart, devoted, responsive, and adaptable. Anatolian owners must be strong leaders, willing and able to handle a dog as dominating and demanding as she is calm and loving.

See that part about "dominating and demanding?" I'm really having to step up my game on this, or rather remember what I did to make Moosie into the dog he became. So far, we've determined who's alpha in this pack. If you had any doubt, it's me, but only because I know better than to let up on them for one instant. But should I need to take a break, I'll just fence them into a pasture with Rosie and her little girl.

Who knew the friendliest of my ewes could be such a terror? Poor Radha was just minding her own business today when Rosie leapt on top of her, then turned and sent that pup tumbling. Oh yeah. It's Rosie who will be my partner on this next adventure. Good sheepie girl!