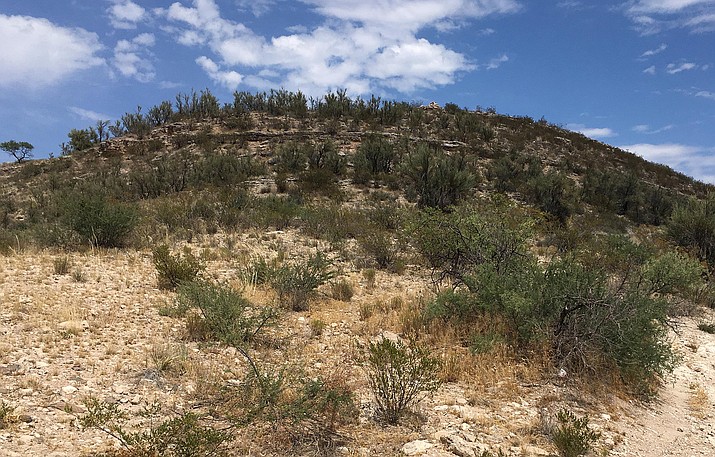 Janet Aniol of the Beaver Creek Community Association Board says the site of the proposed Primrose Peaks housing development is “very rugged, and much of it is steep.” VVN/Bill Helm

RIMROCK – The Beaver Creek Community Association Board has scheduled a 3 p.m. Aug. 17 meeting to discuss a proposed housing development northeast of Bice Road in Rimrock.

But the meeting’s location has not yet been confirmed, said Janet Aniol, association board member.

The need for a second session was clear, Aniol said, when the meeting held last weekend at the Montezuma-Rimrock Fire Station ended due to lack of room for the community’s interested citizens.

“The poor choice of venue for the first meeting was entirely my fault,” Aniol said. “I accept responsibility and extend sincere apologies to those who were not let into the meeting due to fire safety regulations.”

Brandy Ann Cabrera, who lives in Rimrock near Bice Road, estimated that between 30 and 40 people left after being denied access to the meeting.

“Twenty-five or so … stood outside until the meeting ended,” Cabrera stated on the Verde Independent Facebook page.

Aniol also said that the site of the proposed development “has no outlet to Beaver Creek Road or any other developed road in the area.”

“It is very rugged, and much of it is steep,” Aniol said.

According to Yavapai County Planner Leah Genovese, soliciting citizen feedback through public meeting is “required prior to submitting the zoning map change application to the county.”

The project would require county rezoning from RS-70 to a Planned Area Development – PAD.

The proposed project would be called Primrose Peaks Estates. It would include 64 studio units, 64 one-bedroom units, 102 two-bedroom units and 72 three-bedroom units, according to Jeremy Dye, assistant director of Yavapai County Development Services.

The project’s northerly site portion along I-17 would remain open space, with development on the southerly portion of the site, and that the property’s main access would be off Bice Road.

Cepek, who hosted the July 20 meeting with help from the Beaver Creek Community Association Board, said he did not anticipate the amount of people who attended the meeting.

“It was unexpected, that kind of turnout,” he said. “So we’ll have a second meeting. Community input is important. Everyone needs to understand the issues.”

Cepek also said he will attend the Aug. 17 meeting.