Phoenix Rising’s Dumbuya warming up to life in the desert 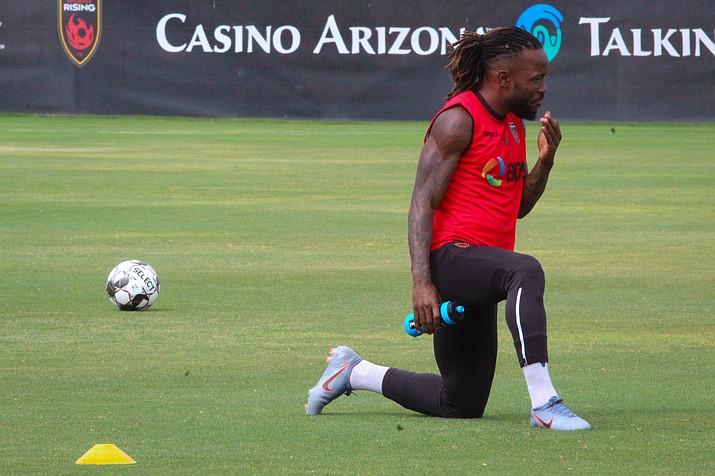 The heat has been a challenge for Rising’s Mustapha Dumbuya. (Photo by Owain Evans/Cronkite News)

TEMPE – The monsoon storm that blew through the valley earlier this week was a welcome sight for at least one Phoenix Rising soccer player.

“The heat’s been getting to me lately,” said Mustapha Dumbuya, who joined the Rising over the winter after playing a few seasons with Partick Thistle in Scotland’s top-flight and living in the cool, wet climate of Glasgow, Scotland.

“I’ve been crying out for a bit of rain.”

With rain comes lightning, and Dumbuya provides more than his fair share of that in the full-back position for the Rising, with speed that assistant coach Peter Ramage claimed is enough to “catch pigeons.”

“He and Junior (Flemmings) are the only players that are hitting 10 meters per second,” Rising coach Rick Schantz said. “As far as speed goes, he’s very difficult to beat one (versus) one.”

Phoenix is a new challenge for Dumbuya, giving him an opportunity to move across the world and compete in a league that he doesn’t feel like much of a dropoff from the Scottish setup, despite the stigma of playing in America’s lower leagues.

It doesn’t get much more different than moving from Scotland to the Sonoran Desert.

But there already was no lack of change for a player who had spent his entire career in the English and Scottish league systems. Dumbuya started out as a youngster in the non-leagues, featuring for Wingate & Finchley, Maidenhead and Potters Bar.

Working his way up the leagues provided Dumbuya with no shortage of memories, and he reminisced about Notts County’s League Cup tie against Liverpool that went into extra-time.

Yet it wasn’t all sunshine – he also featured for cash-strapped Portsmouth during their descent towards the lowest tier of the Football League.

“Portsmouth, fan base-wise, is up there with one of the best I’ve played for,” Dumbuya said. “It was difficult, obviously, because of what we were going through, but you couldn’t really tell on the pitch.”

It was a loan spell with Crystal Palace all the way back in 2012 that first introduced him to Ramage, long before Phoenix Rising even existed.

“He’s an angry guy when you play with him,” Dumbuya said. “He’s an angry, angry guy. He’s calmed down now…a little bit. But he made you so much better. He’d just talk to you for the whole game and just made your position so much easier.”

“Rick called me about him,” Ramage said, “and asked, more importantly, what kind of person he was. Having played with him, he’s one of the most dedicated professionals I’ve come across. His attention to detail, both on and off the pitch, is why he’s had the career that he’s had.”

Still, Phoenix is a long way away from the part of North London where Dumbuya spent most of his childhood, safe from the conflict that was engulfing his home nation of Sierra Leone.

“It was a difficult time because obviously we had a civil war in Sierra Leone,” Dumbuya said. “My mum left a couple of years prior to bringing us over just to come over to the U.K., to try and work as much as she can to make some money and buy us tickets to come to the U.K.

“I literally left a year before the war came down to where I lived, so she got us out just in time.”

Despite growing up in the shadow of White Hart Lane, the young Dumbuya dreamed of putting on an Arsenal shirt, taking inspiration from the invincibles of Thierry Henry, Robert Pires, Lauren and Patrick Vierra.

He took inspiration from another player, too: Argentinian international Pablo Aimar.

“He was small, and I was pretty small as well,” Dumbaya said. “People used to tell me I was too small to play football, blah, blah, blah. But looking up to him, I thought if he can do it, then surely I can, too.”

This season, as he has throughout his career, Dumbuya is proving that he can indeed play the sport, no matter the temperature.

“From when we played together at Palace, it was a little bit different,” Ramage said. “It was more blood and guts, whereas here we want to play and one of (his) biggest attributes is his athleticism, but also that quality to go with that athleticism.

“I think you’re seeing as the season’s going on, he’s getting more and more confident and comfortable in the role that we’re asking him to play, and he’s now creating assists and opportunities on goal.”

And at Phoenix, Dumbuya’s talent is helping the team to push for its first USL crown.