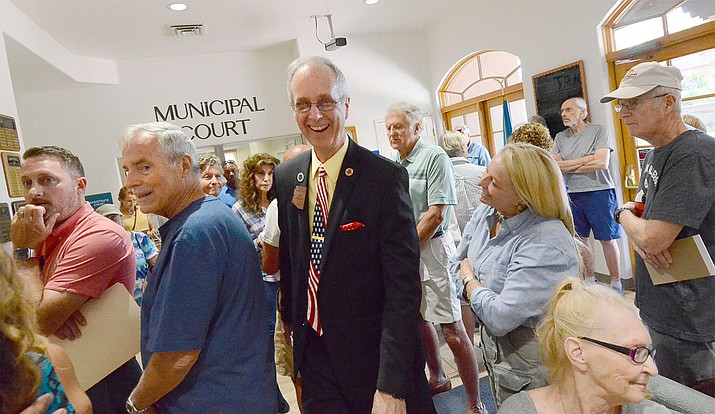 A standing-room-only audience that showed up to participate in a program on short-term rentals with District 6 State Rep. Bob Thorpe Wednesday. VVN/Vyto Starinskas

Giving someone a gift and later asking it be returned is simply bad form.

That’s going to be the biggest obstacle Arizona lawmakers run up against in fixing the mess they’ve created with short-term rentals.

When the legislature and governor gave free rein to the vacation rental industry in 2016, they did so at the expense of a basic fabric of American life. The neighborhood.

That message was heard repeatedly last week when District 6 House Rep. Bob Thorpe held a town hall meeting in Sedona. The Red Rock community is at the epicenter of the debate over vacation rentals and their impacts on a community.

In effect, what it did was redefine a basic tenet of what a community is. It threw the concept of single-family residential zoning out the window.

Especially in a community like Sedona, single-family residential zoning really does not exist anymore. The more realistic nomenclature for what has become of neighborhoods in Sedona would be something along the lines of “lodging district.”

They may be zoned as single-family residential neighborhoods, but the reality is they are places where people visit and crash at night. These homes are not occupied by “single families.” They hardly fit the traditional definition of “residential.”

One need look no further than the Sedona school system for ample evidence that this is true. The Sedona-Oak Creek School District had a student population of 1,438 kindergarten through 12th grade students in 2006. During the 2018-19 school year, the district had 764 students. In pure dollars and cents, Sedona-Oak Creek’s district budget is about 53% of its 2006 fiscal capacity.

Or, consider that great American tradition otherwise known as Little League baseball. Sedona Little League officials this year alerted parents that if their kids wanted to play baseball this summer they would have to join Cottonwood Little League. According to Sedona officials, “we just don’t have enough participation and volunteers to make it work this year.”

During last week’s community meeting on Sedona vacation home rentals, city officials shared a “Temporary Rental Helper” map of West Sedona. It highlighted the residences that are being used as rental properties. To the uninformed, it easily could be mistaken for a U.S. Forest Service map that shows the number of lightning strikes during a monsoon storm.

Granted, it’s not exclusively the fault of the vacation rental home industry that has run families out of Sedona. Nor is the malady unique to Sedona. Friday, Yavapai County School Superintendent Tim Carter said a similar problem exists in Prescott and like Sedona it has had a crippling effect on that community’s school system.

Can the legislature and governor fix this problem they created?

It will be about as easy as getting a lion back in the cage from which it escaped.

There are going to be a lot of folks who believe this gift has a no-return policy.