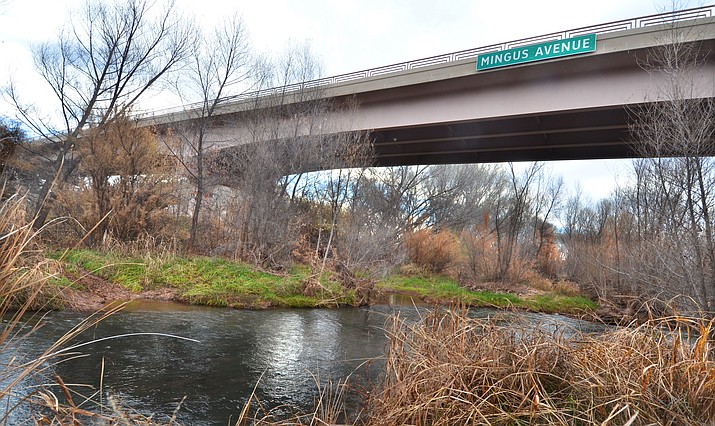 The Verde River flows under the bridge at Mingus Avenue in Cottonwood. A new bridge will now be constructed between I-17 and the two bridges in Cottonwood as part of the new Verde Connect roadway project. VVN/Vyto Starinskas

CAMP VERDE – Wednesday, the Camp Verde Town Council will talk about a $25 million BUILD grant that would help fund a connector road Yavapai County hopes to build from SR 260 to Cornville Road.

According to Town Manager Russ Martin, other than the county’s representatives, “these are groups who haven’t been heard from regarding this project.”

In a letter included in council’s July 31 agenda packet, Mayor Charlie German stressed that council’s current position is through a resolution supporting a no-build solution, a resolution council passed unanimously on June 19.

German stated in the letter that council can change its mind by repeal or by implementing a new resolution. But Wednesday’s meeting is information only, Martin said, and not an opportunity to change position.

Though no-build solution is always an option, Martin said it has consequences.

“Does no-build mean four lanes on Cornville Road? What does it mean? In these processes you spend a lot of time focusing on the build, but not enough on the consequences of no build, or what other options does a no-build solution represent,” Martin said.

Copper Canyon Fire Chief Terry Keller said that for Wednesday’s meeting to be a success, “all sides would get better clarity on the pros and cons of the proposed route, the implications of the connector, and what happens if there’s no connector.”

Should the county decide not to build a connector route, then “other options would have to be pursued,” Keller said.

“Like it or not, the Verde Valley will grow,” Keller said. “I still see pressure to build better interconnectivity. But no build, the flip side to me, if you turn the grant down, you put Arizona in a bad light. You put yourself in a spot if you look for other money. Do you jeopardize your options of getting other grants?”

Using the mind’s eye of a career first responder, Keller said that as a matter of public safety, it “just makes sense to have the connectivity.”

“If we’re busy and we rely on the other agencies to help support us, then that connectivity enhances their response times,” Keller said.

The meeting’s agenda can be found at campverde.az.gov.