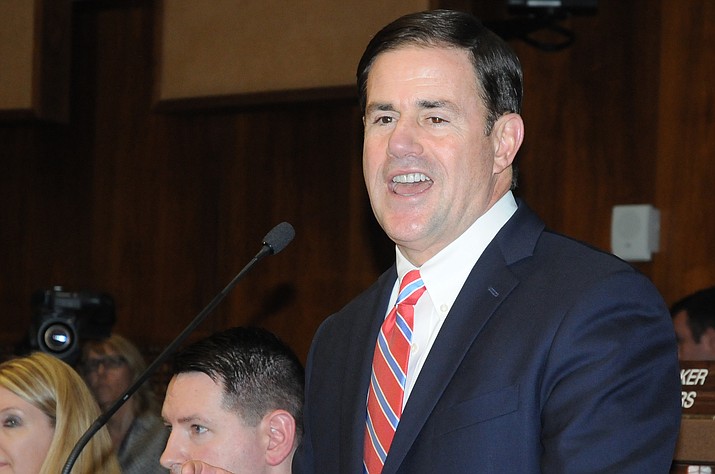 PHOENIX -- On paper, that $11.8 billion budget signed Friday by Gov. Doug Ducey is a somewhere north of 11 percent higher than what was adopted a year ago.

But there’s less there in actual new spending than meets the eye.

It starts with a $271 million deposit into the state’s rainy day fund.

On top of that, lawmakers also set aside $190 million to pay off some debt the state incurred nearly a decade ago to balance the budget.

And the fact is that the budget for the current fiscal year that ends June 30 ended up being larger than the $10.4 billion adopted, what with additional spending.

Take away all that and you’re in the neighborhood of 7 percent year-over-year increase.

None of that factors in population growth, which was 1.6 percent in 2018 -- the newest numbers won’t be in for a few more months.

George Hammond, economist at the University of Arizona Eller College of Management, said the most recent figure nationally was 2.4 percent. But even that may be misleading.

He said for the western part of the country inflation weighed in at 3.3 percent. And for the Phoenix metro area the figure was 4.2 percent.

And there’s something else to consider when looking at the size of the budget.

here’s something else to consider.

In the 2010 fiscal year the state’s operating expenditures were $9.9 billion.

It’s true that that figure dropped pretty steadily through the rest of the recession, down as low as $8.3 billion, as lawmakers scrambled to cut expenses as the bottom dropped out of the revenue side of the equation.

But it also means that the newly adopted $11.8 billion state budget -- even with the money used to pay off debt and put into the bank -- is less than 20 percent higher than it was a decade ago. That’s 2 percent a year, not counting inflation.

There’s another reason that the $11.8 billion figure is not a true indication of the growth of government, at least not going forward.

It includes more than $500 million of one-time expenditures, money the state is allocating -- but with no promise to keep it up in the future.

What lawmakers approved as base spending is no different than last year. But they did agree to a one-time $35 million infusion for the schools -- $18.9 million for Arizona State University, $9.4 million for University of Arizona and $6.7 million for Northern Arizona University -- to use as they want, but with no promise that the dollars will keep flowing in future years.

Lawmakers also provided $62.8 million for public schools for repairs for the coming year. But they have refused to put dollars into a fund that schools are supposed to get, according to a formula, to stay ahead of problems before they get big and expensive.

And even some of the dollars being allocated for health care, like $1.5 million for the Benson and Northern Cochise hospitals and $700,000 for a primary care clinic in Colorado City, are one-time infusions.

There are some other odds and ends in the spending plan.

One of the more unusual is a requirement for the state to withhold funds from Flagstaff for the additional costs incurred by providers of services to the disabled because that city’s minimum wage is higher than the current $11 state minimum, a figure that goes to $12 next year. By contrast, Flagstaff already is at $12 and will go to $13 next year and eventually to $15.50.

But Sen. Sylvia Allen, R-Snowflake, inserted a footnote into the budget requiring Flagstaff to pay just $150,000 this coming year. The state will match it with $300,000 with the idea of drawing down additional federal dollars.

Allen told Capitol Media Services, however, this is a one-time deal.

“It is not fair for the rest of the taxpayers to have to come up with money,’’ she said. But Allen said she hopes the one-time reprieve coupled with the threat of future higher costs might pressure Flagstaff residents to reconsider the city’s minimum wage ordinance.

Also in the spending plan is $20 million for Pinal County farmers to drill new wells to tap into groundwater to replace the allocation of Colorado River water they are losing as part of the drought contingency plan.

The farmers say they -- or at least their irrigation districts -- are entitled to the groundwater. And they say the dollars, on top of $9 million already provided by the state, should be reimbursed if they get an anticipated federal grant.

None of that has sat well with the Sierra Club which questions the advisability of increasing groundwater pumping in an area where there already is some evidence of land subsidence.

That includes nearly $165 million for the next step of the plan to increase average teacher salaries by 20 percent by the 2020-2021 school year. And then there’s an additional $136 million to restore money removed during the recession from the “district additional assistance’’ account, cash for books, buses and computers, though that still leaves schools about $130 million short of what they should be getting according to formula.

The Arizona Health Care Cost Containment System, the state’s Medicaid program, retains its title as taking the largest share of state tax dollars at nearly $1.8 billion. And that doesn’t count the more than $12 million from other sources, mainly federal funds.

And the cost of locking people up also is going up, with the budget for the state Department of Corrections now exceeding $1.1 billion.

On the other side of the ledger, most Arizonans should see lower income taxes, with changes in tax brackets, a bigger standard deduction and a new dependent credit. That is designed to offset changes in federal tax law that largely will hit those near the top of the income scale and the state’s decision to start collecting a sales tax on online sales.