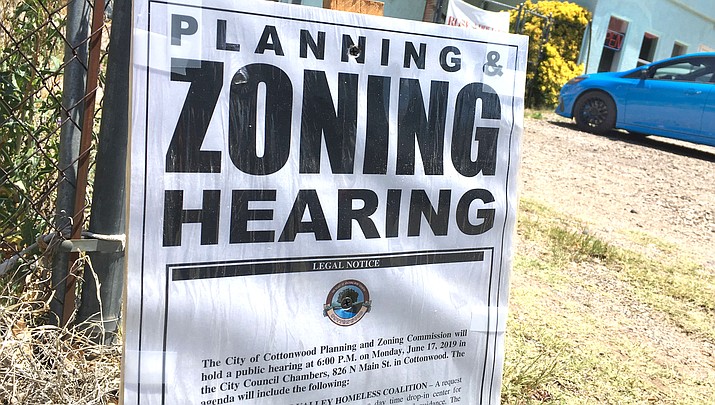 A zoning sign has been posted on 15th Street announcing a June 17 Planning and Zoning meeting for a homeless shelter in Cottonwood. VVN/Vyto Starinskas

She explained that Mayor Tim Elinski, who is on the VVHC Board, made the contact with the individual. He’s a “prominent, community partner,” Elinski said of the person Tuesday.

But the local homeless group still needs to match the $13,000 donation with local fundraising in order make it through this upcoming fiscal year, Avalon said.

During the past fiscal year, the drop-in center was funded by a one-time Community Development Grant of $12,000 from the City of Cottonwood in addition to some local donations.

For this upcoming year, in addition to the $13,000 private donation, they have already raised about $2,000 toward the matching $13,000 they want to raise to cover utilities, electricity and other costs, Avalon said.

The VVHC wants to relocate from its current location on South Main Street to a larger building on 15th Street where it can serve 20 overnight homeless on cold-weather nights in the winter as opposed to 12. The drop-in center is also now open every day,

The VVHC hopes to be moving into the new building on Aug, 1 with the city’s approval. A zoning sign has been posted at 327 South 15th Street announcing a Cottonwood Planning and Zoning Commission meeting on June 17th at 6 p.m. for the Verde Valley Homeless Coalition “to operate a day time drop-in center for homeless individuals to provide job search services and guidance.”

The building is at the end of a dead-end on 15th Street in Cottonwood. It would double the space of the current drop-in center and emergency overnight shelter, said Avalon.

Originally, Avalon wanted to purchase the entire building on 15th street and turn the other half into transitional housing.

But the VVHC and city officials determined that it would cost too much to renovate and bring up to code, so they will only lease the drop-in space at the front of the building, she said

Avalon is still optimistic she can find space to rent for a transitional housing program near the drop-in center.

She said she did go to the city for a line-item request for money to run the shelter this year, but was turned down.

However, the director said next year she will again apply to the city for funding under a line-item request for non-profit organizations.

She said Cottonwood really responded when she put out a call for help for her organization.

Avalon said besides the rent, they organization is in need of some specific items for this time of year, she said.

These would include shorts, deodorant, backpacks, tents and sleeping bags.