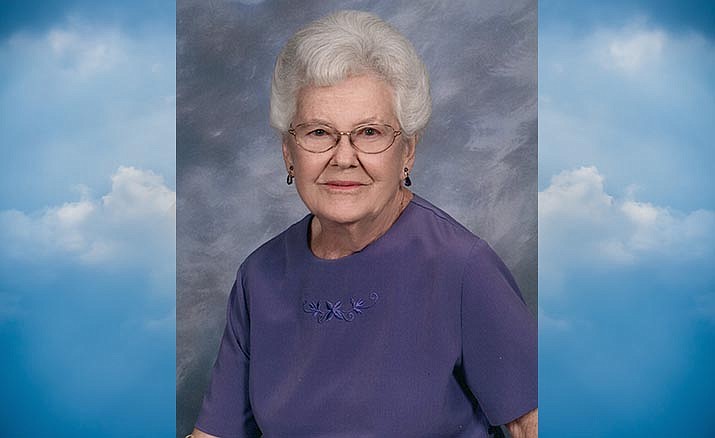 Violet Marie Ridgley, age 99, went to rest peacefully at Haven Health of Cottonwood on Thursday, May 30, 2019. Violet was born Feb. 6, 1920, in her parents’, Wesley and Flora King, home on the family farm in Chase County, Kansas.

Her sister, Velma, was nearly 14 years older. Violet grew up spending a lot of time riding her horse with her favorite dog trotting beside as a constant companion.

Violet graduated from high school in Burns, Kansas, in the spring of 1940 and attended Southwestern College in Winfield, Kansas.

At college she met Francis Leroy Gerstberger and they were married in 1941 after his graduation. Leroy served in the US Army during WWII and again in the Korean Conflict.

After serving he became a teacher and together, they began their family with the births of son, Richard and daughter, Zenita.

Leroy passed away in 1952. Violet and the children settled in Tolleson, Arizona. Violet worked at West High School in Phoenix as secretary to assistant principal.

In 1957, Violet married John Ridgley, and gained a daughter, Patricia. The Ridgleys purchased a lot in Kachina Village which became their favorite get away, one especially enjoyed by their grandchildren.

They lived in Verde Lakes until John’s death in 1984. Violet moved to Verde Village where she took great pride in her home with its impeccable landscaping and beautiful roses.

In 1991 she began attending Verde Valley Christian Church. In 2010 Violet moved to Cottonwood Village where she enjoyed socializing with friends, playing bingo, cards and many other activities.

On Friday, June 7, 2019, a Celebration of the Life of Violet Marie Ridgley will be held at 2 p.m. at Camp Verde Christian Church.

She was preceded in death by her parents, sister, husbands, son-in-law Keith Spanjer, granddaughter Gloria Osborn and great-grandson Jason Asselin.