Two bear sightings in Jerome in past week
Bagley: There are between 50 and 70 bears in the Mingus Mountain range 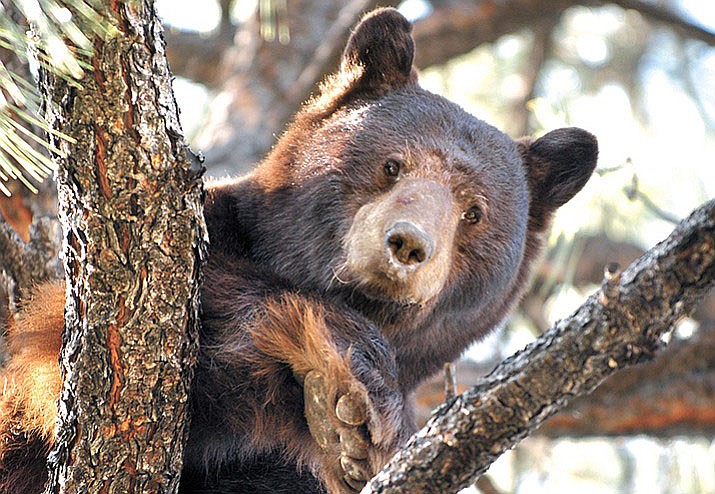 JEROME – There have been two sightings of a bear in Jerome in the past week.

“Our officers investigated and did not locate the animal, and AZ Game and Fish has been notified,” the town reported on its Facebook page.

Friday morning, Police Chief Allen Muma said a bear was spotted near the Grand Hotel rummaging through a dumpster on Giroux Street. “They described it as small, probably the same bear that was spotted on School Street earlier in the week … I found tracks near the dumpster so I’m sure the reporting person saw a bear.”

Muma said Arizona Game and Fish Department officials have been notified and he expects they will make an effort to trap the animal.

Tom Bagley, a wildlife manager for the Arizona Game and Fish Department for 29 years, the last 27 of which have been spent in the Verde Valley, told The Verde Independent in 2018 there are between 50 and 70 bears in the Mingus Mountain range, including Woodchute Mountain and the Black Hills through the community of Cherry.

“Some of the bears that have come into the Verde Valley communities in the past were from Mingus Mountain, others have followed Sycamore Creek to the Verde River from the Casner Mountain area. In Camp Verde, bears have come down from the Black Hills, Squaw Peak, and the Cedar Bench Wilderness,” said Bagley.

In 2009, The Verde Independent reported an Arizona Game and Fish Department wildlife manager killed an adult male black bear after it had repeated encounters with people on Mingus Mountain.

If you do come across a bear, Bagley said it’s likely going to be a juvenile, about 18 months old and weighing between 70 and 100 pounds. “Young bears spend their first year with their mother. By their second year, they have been kicked out and are on their own, searching for food, water, and shelter,” he said. “Mature male bears claim and defend the prime food and water sources, and will keep young bears away. These young bears, then, must travel, sometimes great distances, to find food and water to survive. Sometimes this search brings them into town. When they find the Verde River and area creeks, the lush riparian vegetation is strong incentive to stay a while. If the bear finds residential yards with dog food, bird seed, unsecured garbage cans, compost piles, gardens, fruit trees, green lawns, or small livestock, these attractants can be too much to resist and can lead to conflicts with humans.”

Despite its close proximity to Mingus Mountain, Jerome Police Chief Allen Muma previously told The Verde Independent bears are not nearly so common to Jerome as are mountain lions, although he well remembers a bear once taking up residence in a tree in a town park.

“I have personally observed more mountain lions in Jerome than bears,” said Muma. “I have seen three bears around Jerome in all my years here, but have observed over a dozen mountain lions.”

In 2003, The Verde Independent reported several sightings of what was believed to be the same mountain lion that kept Jerome residents on edge after some residents reported missing pets and one homeowner reported coming face to face with the cougar when she opened her front door.

Jerome resident Ivy Stearman told The Verde Independent in August 2003 she heard a lion’s growl and later found pieces of her pet cat less than 20 feet from her front door. In the same story, Muma said, “A resident of town found a lion devouring his cat and he reported that it wouldn’t leave when he shouted at it.”

Arizona Game and Fish Department has a brochure on its website titled “Living With Bears.” In a nutshell, it says the best way to avoid encounters with bears or mountain lions is to not make your property a target. Keep all trash inside a secured area until collection day. Take bird feeders down at night. Don’t leave pet food bowls outside.

“The public can take steps to reduce bear-human conflicts by eliminating easy food sources from their property,” Bagley explained. “Common food items which draw bears to a neighborhood include unsecured garbage cans, accessible dog or cat food, bird seed, and free-ranging small livestock that are not put up at night into a secure pen or barn.”

But if you do see a bear or mountain lion on your property, Bagley said the best advice is to call in the experts. Don’t take matters into your own hands.

“The Game and Fish encourages anyone who sees a bear near a community to report it to our dispatch center, 24-hours a day, at 623-236-7201 so that we can monitor each bear’s activity and make informed decisions on how to proceed,” said Bagley.

From AZ Game and Fish

Never approach a wild bear. Black bears usually avoid people, but if they start to associate people with food they may become aggressive.

If a bear is in your yard or neighborhood, immediately contact the Game and Fish office at (623) 236-7201 (line is available 24/7). Depending on what the bear is doing, department personnel may respond if it remains in the area.

Deter the bear by making loud noises, such as yelling, whistling or banging pans.

If you see a bear in the distance, alter your route to avoid it.

On the rare occasion that a bear approaches you, discourage it by:

Know the law. Bears are classified as big game animals in Arizona and are protected by state law. They can only be captured or killed by the Arizona Game and Fish Department, legally permitted hunters, or in defense of yourself or another person.