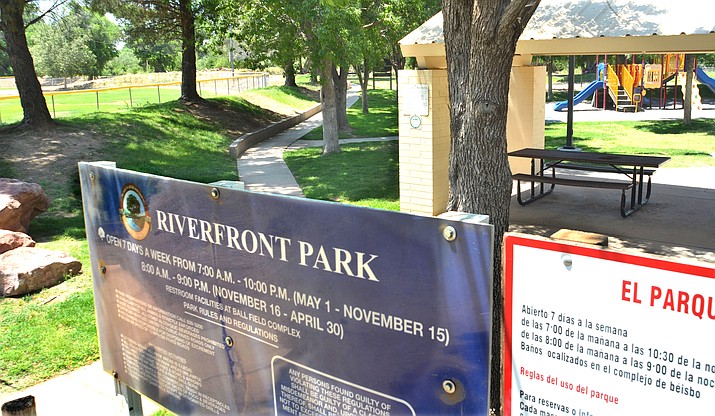 The city is conducting a study to see what the future recreational uses for Riverfront Park will be in Cottonwood. VVN/Vyto Starinskas

What do you most value or would most like to see at Cottonwood’s Riverfront Park complex?

The City of Cottonwood wants people to make full use of and enjoy Riverfront Park. So the city is seeking suggestions from the community for ideas on what to do with the park in the future.

Recreation is changing, according to Cottonwood Interim Director of Parks & Recreation Hezekiah Allen. People are participating in less league sports today, so there is an interest in providing other kinds of activities.

The recreation department is taking suggestions on social media and will have a meeting to hear about what activities the community would like to see at the park.

So far, the community is telling Allen that some of the things they want included are pickleball courts, sand volleyball courts, multi-use green areas, splash pad, a walking path, a children’s bike track, work-out stations, more soccer fields and a larger, shaded dog park. “We are relying on the community to tell us what they want to see,” said Allen.

First, the Riverfront Park Master Plan will be paid for with money the city has left over from the State Parks Trails grant of $108,000, he said.

This plan is much larger and will take a look at all future recreation trends in the city, all Parks and Recreation facilities, what does the entire community need going into the future, and set plans for all the parks and facilities in the city, he said. This will be paid for by a Community Development Block Grant, he said, of about $330,000, allocated and approved by the city council, Allen said.

“We’ve done a lot of community engagement thus far,” Allen said about the planning for the redesign of Riverfront Park.

The department has a “concept” posted on its website and on social media to get additional feedback, he said.

The next step will be to set a stakeholders meeting, maybe in the next few weeks, to get more input from the community, then present to the Parks and Recreation Commission and then to the City Council, he said,

Allen said the designers will be at the stakeholders’ meeting. They will be looking at the roller hockey rink with the community and see how it fits into the overall plan for the future. He hopes anyone supportive of the rink would come to the meeting.

Allen said one common theme he has heard is that people are looking for more “family friendly passive activities” as opposed to “active” sports leagues. People are busy and don’t always have time for organized sports, Allen explained. Nationally, he said attendance is going down in league-type sports. Other than organized sports, there’s not a lot in the area for kids, he added.

The rec department is also working on a hiking trail that will someday hook into the trails at Dead Horse State Park.

Allen said the organized leagues are still doing well and participation is high in Cottonwood, but the city needs to incorporate two-income families that don’t have two or three nights a week to devote to sports. “Those recreational activities you do when you have time,” he said of passive-park planning.

Allen pointed to the mountain bike course they have at Riverfront Park as another good example of a place for a quick workout. The department is also installing a two-mile loop around Riverfront Park which will have exercise stations on it, he said. And the disk golf course can also be played anytime. Also included in the discussions will be how they can improve the community garden.

“A lot of what we’re doing right now is setting that groundwork and that vision for the future,” Allen said. “And that comes through citizen engagement.”

See Related Reader Poll: What do you most value or would most like to see at Cottonwood’s Riverfront Park complex?