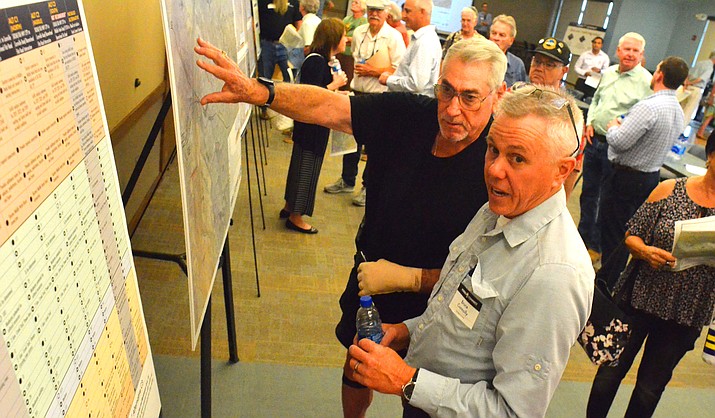 COTTONWOOD -- Verde Valley residents Tuesday got their first up-close look at the various routes under consideration for the Verde Connect project, which proposes a new two-lane highway and bridge over the Verde River between Cornville Road and the roundabouts on SR260 between Cottonwood and Camp Verde.

There was no formal presentation, so the 70 to 80 people who showed up at the Cottonwood Recreation Center for Tuesday’s community meeting stood and examined large maps of seven different proposed routes of the highway.

People squinted and examined each of seven routes and asked questions of the 15-20 Yavapai County engineering and staff on hand for the meeting.

The Verde Connect project would be funded in part by a $25 million Better Utilizing Investments to Leverage Development grant for a new bridge over the Verde River. The rest would be funded by the county and other grants.

Lee Silver of Cornville said he preferred a route with the least residential impact, but also wanted to know what impact the highway would have on Cornville Road.

The proposal has seven routes, and six connect with Cornville Road at the Beaverhead Flat Road intersection.

Silver said he believed many motorists traveling from the Village of Oak Creek would take the new county road off Beaverhead Flat to get to Cottonwood. This, he said, would help spread traffic around. Silver was told by a county official that Cornville Road one day will be widened into four lanes near Verde Santa Fe once a new housing development is built.

“At this point, I don’t think I would commit,” Silver said. But if he had to make a choice because of funding deadlines, it would be the route that connects with Coury Road at SR 260. 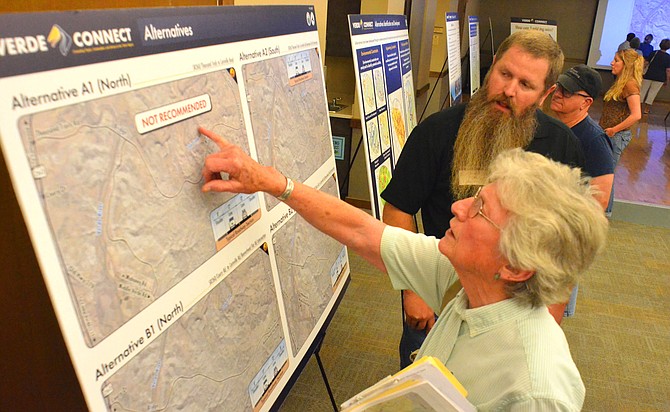 Gail Heyer speaks with Joe Link from Shephard Wesnitzer, Inc and Verde Connect about the highway during the Verde Connect Meeting in Cottonwood on Tuesday. VVN/Vyto Starinsaks

Gail Heyer of Cornville said she was attending her second meeting on Verde Connect. She said some of the routes were better than others and was glad the county is sensitive to the concerns of the Yavapai-Apache Nation.

Heyer also suggested that Verde Connect should reduce some of the traffic on Cornville Road from Beaverhead Flat to SR89A.

“I think their (the county’s) presentation was very good,” Heyer said. “I just hope they act upon what they’re indicating. It’s politics, you know.”

Dan Cherry, director of Yavapai County Public Works, said they had about 15 to 20 people at the meeting to help answer questions of the public. This includes county and private designers and engineers who are working on the project team.

“We have some here who are in opposition to it, some people are just here to inquire” he continued, and there people here who “support” this road.

“We have a good mix,” the director said.

Yavapai County Supervisor Randy Garrison said he was pleased by the turnout.

Garrison said he liked the format without a formal presentation because everyone got “specialized attention” to their questions about the Verde Connect.

Garrison said he did have his own personal preference for a route, but did not want to influence other people’s opinions during this process. Some routes have different benefits such as river span, population in the area and land ownership, he said. Some would be easier to purchase easements for, he said.

“Hopefully people come out of here with what is being presented,” he said. “It appears people are getting their questions answered.”