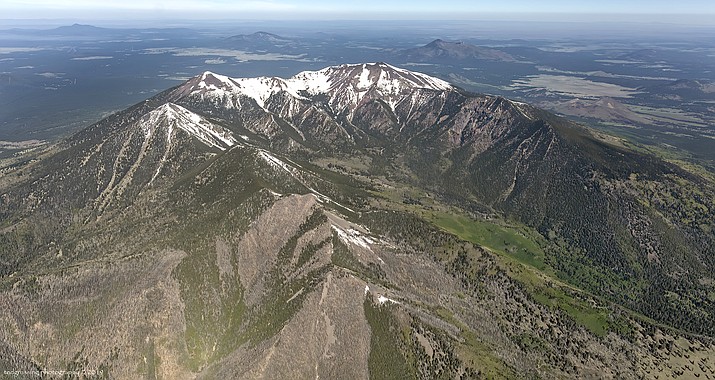 When I took off this morning the smoke was pretty intense, so I pointed the nose up and to the north. I went above the smoke layers around 13,000’ and kept climbing. As far as I could see in any direction there was a layer of smoke and numerous burn sites were visible … at least 10,000 square miles were blanketed with the stuff.

I took this shot of the inner basin of the San Francisco Peaks from the SE end of the peaks looking pretty much WNW. Because I was high and shooting more or less down, the smoke in the foreground was not so thick and I was able to remove/dehaze it pretty well, but the further out you look the less effective the effort was.

I really love this shot though as it takes in all of the named peaks of the San Francisco Peaks … starting with the lower left ridge there is Doyle Peak, Freemont Peak, Agassiz Peak, Humphreys Peak, Aubineau Peak and Rees Peak which is roughly across the inner basin from Doyle. Just above Humphreys Peak and to the right a little is Kendrick Peak and working up and left, next is Sitgreaves Mountain and then Bill Williams Mountain near the upper left of the photo. The inner basin is also the caldera of the volcano and the blast blew up and out to the east. I think I’ll take this shot again in the fall when the mountains are in color.

I was at 15,128’ and the coordinates for those who care are 35,19.6232N, 111,35.9423W when I took this shot. I was about half a mile above Humphreys Peak. Before the volcano erupted about a million years ago, the mountain was a single peak and another two or three thousand feet above where I was when I took this shot … that was a real blast! After I circled the peaks, I climbed to some unspecified altitude, turned the engine off and had about a 40 minute sled ride down through Sycamore Canyon then back to the Verde Valley and eventually Sedona … FUN!

I’m also attaching the schedule for the Sedona Photofest … hope you avail yourself of this free event and if you have an interest in photography you will have three great days enjoying the event!

Up to the Arboretum in Flagstaff in the morning … make that seven hours … time to wrap it! Have a beautiful day!

A bird flies through the sky, and I fly with it. I am each pearl of moisture sparkling in the sun.

I lie lazy on the clouds. And I acknowledge my kinship with each winged thing.

I see all as one, and nothing repels me, as this new day climbs noiselessly out of the valley of the night.