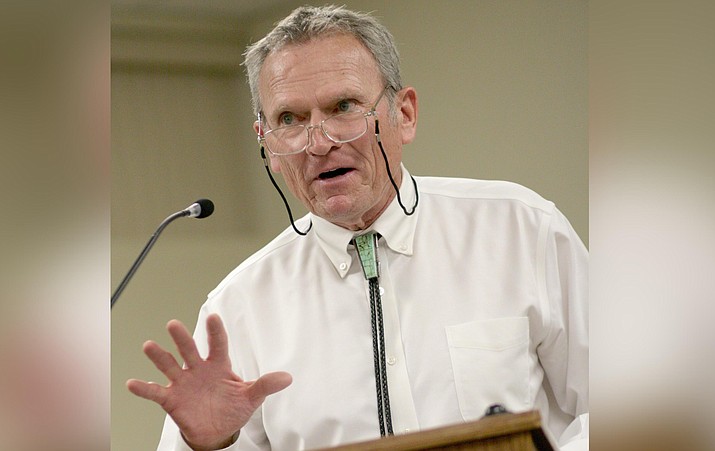 Joe Butner: “It would not benefit the residents of Camp Verde. And it’s highly questionable if it would benefit any residents in the Verde Valley.” VVN/Bill Helm

CAMP VERDE – Yavapai County hopes to build a connector road and bridge across the Verde River to connect Cornville Road to SR 260.

Should council vote to support the resolution, Town Manager Russ Martin will “be directed on behalf of the mayor and common council to not assist any agency proposing such a road.”

These directions include but are not limited to:

• Planning, funding, or permit application support (provision of data, maps, letters of support, and so forth), and

• Obtaining rights-of-way or easements, and

• To any extent that the Town of Camp Verde has authority, no permits shall be issued for work related to such a road.

The resolution would allow Martin to “provide any agency proposing such a road with copies of the Town of Camp Verde General Plan and shall further take all action possible to cause said agency to comply with the general plan.”

The project would be funded – in part – by a $25 million Better Utilizing Investments to Leverage Development grant for a new bridge over the Verde River. Camp Verde Councilman Joe Butner Monday called the Verde Connect project “a road to nowhere.”

“It would act as a second bypass from businesses on Main Street,” Butner said. “It would not benefit the residents of Camp Verde. And it’s highly questionable if it would benefit any residents in the Verde Valley.”

On June 11 and on June 12, Yavapai County held public forums to solicit public feedback on eight options the county has identified for the connector road.

Of the eight options, two are not recommended by the county, and a third is to not build the road. The other five utilize Beaverhead Flat Road as a connector, with two options also using Coury Drive, two using Old HWY 279 and one using Thousand Trails Road.

Butner, who said he was speaking “for my constituents located out on Middle Verde Road who are adamantly opposed to the project,” would vote for “no build.”

Council’s June 19 agenda packet includes Resolution 2019-1028. Rather than building a connector road, Butner said he would prefer to see work on either Cornville Road or HWY 179.

“The real problem is Cornville Road,” he said. “It needs to be wider. Then we could see where we ought to go.”

A copy of the agenda, including the proposed resolution, is available at campverde.az.gov/government/town-clerk/agendas-minutes-actions/2019-town-council.