Prescott National Forest issues fire safety reminders
No restrictions issued yet, despite it getting hotter and dryer 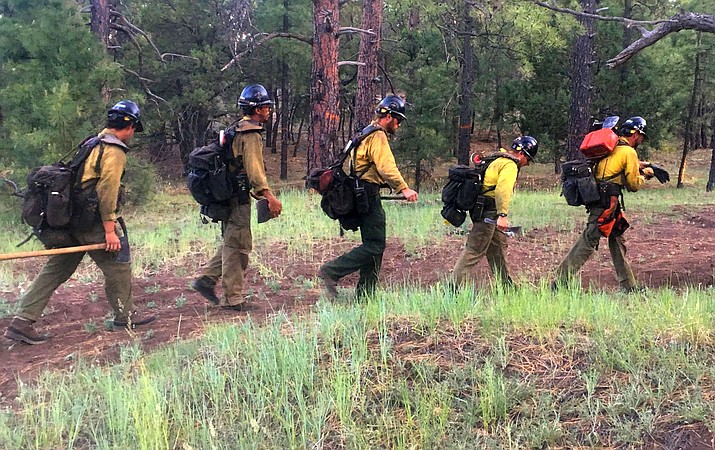 Prescott National Forest and Jerome firefighters were called to Mingus Mountain late Monday following a report of a wildfire at the Potato Patch campground. Jerome firefighters left the scene just before 7 p.m. while Forest Service personnel remained for final cleanup and to make sure the area was secure. VVN/Vyto Starinskas

Pete Gordon, PNF’s fuels, fire and aviation staff officer, said, “The conditions associated with high-fire intensity on the Prescott National Forest are still below average and the forest is in great shape thanks to the abundant winter moisture and the rainfall we experienced in May,” Gordon said.

Not only that, but there also simply haven’t been any fires in the forest in recent weeks, Gordon said; and if any occur, he said the agency currently has more than sufficient resources to handle a significant response if necessary.

“Right now, we’re a long way from seriously considering any form of fire restrictions,” Gordon said. “It’s nice to be in this spot, especially considering how bad we had it last year.” (This time last year, all of Yavapai County was under heavy fire restrictions and part of the Prescott National Forest was closed to visitors due to the high fire danger.)

That said, vegetation is drying out in some areas and the public should be taking the standard fire precautions that become extra relevant this time of year. Those include the following:

• Ensure campfires are completely extinguished before walking away from them for any reason (drown with water, stir, drown and continue until cold. “Smothering” a fire with dirt is not sufficient to put the fire “dead out.”)

• Know before you go. Be sure to check with your local fire department on specific fire restriction in your neighborhood and become familiar with the fire restrictions that exist across Yavapai County and Arizona State Lands.

Current fire information and restrictions are at wildlandfire.az.gov or at firerestrictions.us, or call 1-877-864-6985.

Tonto National Forest implemented Stage 1 fire restrictions as of Saturday, according to FireRestrictions.us.

• Igniting, building, maintaining, or using a fire, including charcoal and briquettes, outside a fire structure that is provided by the Forest Service within a designated area.

• Smoking, except within an enclosed vehicle or building, a developed recreation site, or while stopped in an area at least three feet in diameter that is barren or cleared of all flammable material.

• Blasting, welding, or operating an acetylene torch or other torch with open flame.

• Discharging a firearm, except while engaged in a lawful hunt pursuant to state, federal, or tribal laws and regulations.

• Holders of Forest Service Special Use Authorizations are exempt from restriction #1 above, provided such fires are within a fire structure and they are within their permitted area.

• Persons using a stove fire in a designated area.

• Any Federal, State or local officer, or member of an organized rescue or fire fighting force in the performance of an official duty.

Firefighters continue to fight the Woodbury Fire, which as of Sunday grew to 35,000-plus acres.

The fire’s origin is five miles northwest of Superior in the Tonto National Forest, according to from Arizona Boating & Watersports – azbw.com.

“Despite continued work by firefighters, aircraft, and heavy equipment, due to rugged terrain and fire behavior, containment remains at zero percent,” according to Arizona Boating & Watersports. “Containment is defined as: the status of a wildfire suppression action signifying that a control line has been completed around the fire, and any associated spot fires, which can reasonably be expected to stop the fire’s spread.”

Fire managers on the South Zone of the Kaibab National Forest will continue operations on multiple prescribed fire projects on both the Williams and Tusayan Ranger Districts over the next several days and into next week as conditions remain optimal for beneficial prescribed fire treatments.

The project is located between County Road 73 and Whitehorse Lake and began June 18. A helicopter will be used for aerial ignitions in combination with ground ignitions on this 2803 acre unit. This operation is expected to last for approximately two to four days.

A large column of smoke will be visible from Williams, Parks, Sherwood Forest, Garland Prairie, Whitehorse Lake and the Interstate 40 corridor on Tuesday and Wednesday. Visitors are asked to avoid camping near the areas surrounding this burn and follow directions that are posted in the vicinity of the project area.

The identified area is 2,100 acres and will be completed utilizing ground ignitions. This operation is expected to last for approximately 10-12 days, this may or may not occur concurrently. A column of smoke will be visible from East Rim Drive, Cameron and HWY 180 as you approach the Grand Canyon N.P. from the east.

Smoke may be highly visible at times from roadways and communities adjacent to these burns. Expect moderate smoke impacts to Whitehorse Lake campground Tuesday and Wednesday night.

With the forecast and time of year smoke clears by mid-morning each day. Fire managers will actively use methods to reduce smoke production, minimize duration, and reduce exposure to rural communities and travel routes whenever possible.

Record setting moisture levels received on the Kaibab National Forest in 2019 have presented exceptional opportunities to implement these treatments in the early summer months this year, Forest officials said.

During operations, fire personnel and vehicles working in these vicinities will be visible to the public.

Motorists are reminded to use caution and drive with heightened awareness when passing through active project areas.

All prescribed burning on the Kaibab National Forest is subject to approval by the Arizona Department of Environmental Quality.

Additional fire information for Kaibab National Forest can be obtained through the following sources: