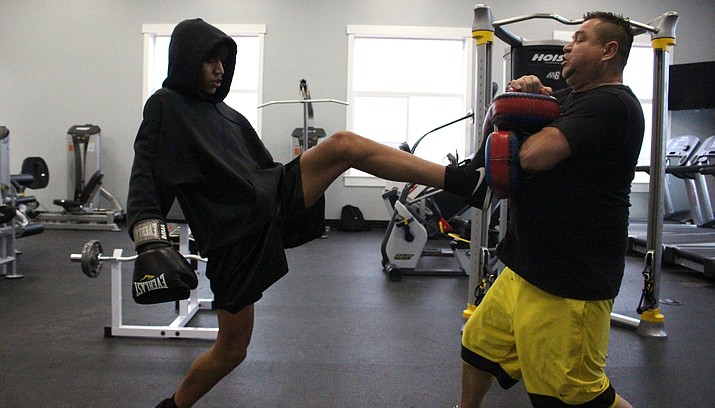 The International Kick Boxing Federation’s return to Verde Valley will feature some debuts but also will be headlined by a familiar face.

On Saturday night starting at 7 p.m., Reese’s Tire Pros will host The Golden Rumble at 2435 East State Route 89A in Cottonwood.

The main event will be the Junior Amateur IKF of Arizona State Title. It is super welterweight, from 147.1 to 153 and it will be four two-minute rounds.

Hines, who is a member of the Yavapai-Apache Nation and goes to Mingus Union, stepped up to fill in after a cancellation from New Mexico.

“It just feels amazing,” promoter Richard Williams said. “This week I lost about three fights, trying to figure out what’s going to happen and when I was coming home from Cottonwood I just go ‘man, right here in my own backyard’ and I didn’t think of it earlier, we were trying to find this main event fight.”

Hines said it’s really cool to be fighting again after a layoff of a few months and that training has gone really well so far. His trainer is Victor Romero.

“He hasn’t lost a beat,” Williams said. “I was very impressed with him, he’s gonna do well.”

Hines and Garza will fight under international rules, so no knees, clinching or elbows. But it is full contact so they can kick inside calf, outside calf, inside thigh, outside thigh, kick to the ribs, kick to the head and they can do Superman and back spinning fist.

IKF Arizona State Representative said getting the IKF set up in Arizona and getting the event together has been the biggest headache of her life but thinks it will be a great night.

With contingents expected to be coming from Flagstaff and Phoenix too, Williams anticipates the event will be packed.

“We should have a pretty good crowd,” Williams said.

8 Limbs MuayBoran Sunnyside Boxing in Flagstaff will be sending three fighters, a 12 year old and a 14 year old and 21 year old Caddo Nahee Laban, the first Hopi fighter to compete in a full contact sport.

Laban is from the Sand clan from Tewa Hopi Village. He is an NAU student and went to Flagstaff High.

“He had to get his feet wet somehow,” 8 Limbs supervisor Pascal James said. “He’s excited, it’s his first fight, his family’s excited, the tribe’s excited. He’s got a lot of people backing him on this.”

He comes from a family that is very experienced in martial arts.

“Well I think he’s going to set a precedence to this I think it will open up the door,” James said. “His sister has a Taekwondo school on the Hope rez, so does his dad. His dad has gyms all over Northern Arizona. His dad is one of our students.”

The 8 Limbs coaches are all volunteers with the students’ fees going to veterans, seniors, homeless and single parents.

The fighters from Arizona include some Keith’s Kickboxing in Camp Verde, two teams from Flagstaff, a couple gyms from Phoenix and 2 Knuckle Sports.