Step 1 was implementing a two-year ban on camping along the State Route 260 corridor between Cottonwood and Camp Verde.

Step 2 was cleaning up the mess those campers left behind.

Prescott National Forest’s arduous task of cleaning up the area is far from complete. So far, the effort has resulted in 8,500 pounds of trash removed from these public lands. 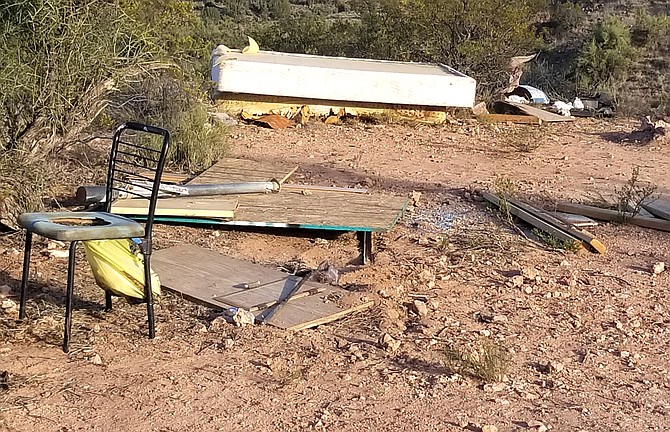 This unsightly campground is located near a hiking area just north of the switchbacks on Cornville Road. Photos courtesy of Christina Slack 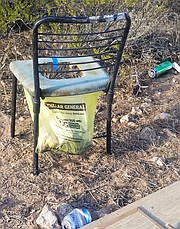 It’s not just the trash that’s the problem with more and more people choosing to camp on public lands.

Debbie Maneely with the Prescott National Forest said overuse and abuse of this area has left it desolate and dry. “It looked like if you’re down there in the Verde River, and you’ve seen areas where there’s grasses and vegetation along the river banks. And that’s what it looked like. And now it’s just flat dirt. There’s nothing there.”

“Camping” is a questionable way to describe these extended stays on Forest Service land. “Normally, you can only stay at a disperse camp for 14 days, and we’ve had people stay there up to 30 days,” said Maneely. “They’re abandoning their property, leaving trash, there’s some illegal activities. There’s human waste in the area.”

The Verde Independent first reported on the problem of semi-permanent camping along SR 260 in April 2016. Recreational vehicles circled together like modern-day wagon trains became a common site along Arizona 260 between Cottonwood and Camp Verde. Ditto for Arizona 89A between Cottonwood and Sedona, at various pull-offs along Cornville Road and Salt Mine Road in Camp Verde from 260 to Beasley Flats Day Use Area.

It’s not just RVers. Some live in tents. Others sleep in their cars. There is no permanency to the places these folks call home. Many admitted to playing the system: 14 days within any 30-day cycle and then moving on to another site just down the road.

That syndrome still exists in the Verde Valley despite the ban on camping along SR 260. They’ve just moved on to other areas. The ban on camping along 260 has resulted in a problem-shift to public lands in the Coconino National Forest along SR 89A between Cottonwood and Sedona. Ditto for the trail system just north of the switchbacks on Cornville Road. It once was considered a prime hiking and jogging area. Now a lot of people are afraid to go there.

One area resident chose to give it a try last week and found some areas appalling. Speaking with some of the campers in the area revealed that thefts and vandalism are common among the folks living in the area.

There’s hope that the addition of two large-scale recreational vehicle parks in the region will provide some relief to the use and abuse of public lands in the Verde Valley. In our 2016 report, some of the campers we interviewed said it wasn’t their preference to park in unsecured areas, but an acute shortage of RV spaces for rent left them no choice.

For many others, though, moving from one makeshift camp site to another on a regular basis has become a lifestyle. It has created a problem that’s going to require a permanent fix from the Forest Service. If there is an opportunity for abuse, those seeking the path of least financial resistance will take it. The problem is as daunting and perplexing as the challenges of homelessness and lack of affordable housing.

This situation is hardly what Woody Guthrie had in mind when he wrote “This Land is My Land.”