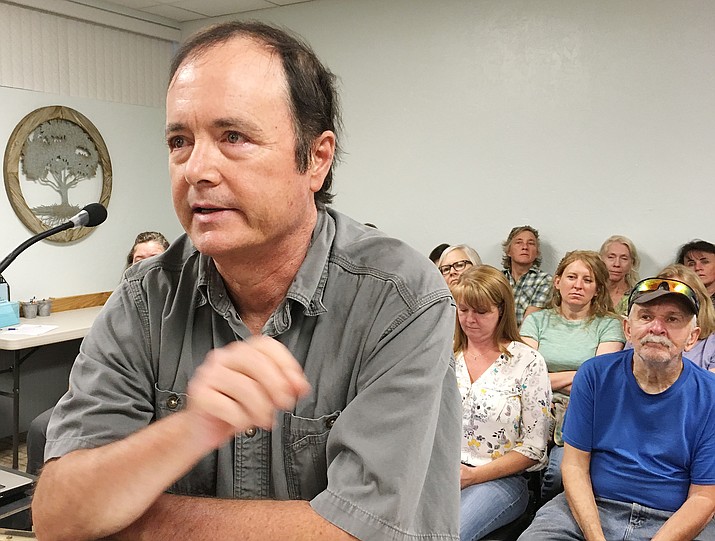 CAMP VERDE – A room full of people laughed as Camp Verde Mayor Charlie German asked whether anyone was in support of Yavapai County’s Verde Connect project. 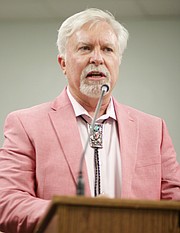 Yavapai County District 3 Supervisor Randy Garrison tells the Camp Verde Town Council on Wednesday that “nobody wants to see the open land spoiled. But that it’s “an unfortunate byproduct of growth.” VVN/Bill Helm

“If you don’t want a road through your area, that’s great. But you’re overstepping your bounds,” Garrison told council Wednesday before it voted unanimously to support a resolution to officially oppose a possible connector roadway and bridge across the Verde River that would connect Cornville Road to SR 260.

Before council’s vote, Mayor Charlie German said he was “in favor of protecting our residential neighborhoods.”

“That’s why I support [the General Plan’s] character areas,” German said. “All too often, political leaders don’t listen to their constituents. My concern is for the voices we haven’t heard.”

German also said that he “think[s] it’s inappropriate to dictate to another government body how they should conduct their business.”

The resolution, sponsored by Council Member Joe Butner, was approved with two amendments.

Camp Verde will oppose “any new regional connector (connecting road) through the confines of US 89A, Highway 179, Interstate 17, and Highway 260 that is in significant conflict with the adopted General Plan.”

The resolution does allow Martin to “provide any agency proposing such a road with copies of the Town of Camp Verde General Plan and shall further take all action possible to cause said agency to comply with the general plan.”

Former Camp Verde Mayor Tony Gioia said that though he “appreciate[d] the county’s efforts, he was “personally opposed to the connector road project.

One community member said an “urgent” issue was the “potential flooding by putting roads through those hills,” while another person said a connector road would “significantly and negatively affect our lifestyle.”

“It would be a formidable task to build through these hills,” Rick Brady said. “We bought [property] knowing it was a dead-end road. It makes no logical sense to me to proceed.”

Admitting that he knew “nothing about the terrain there,” Jim Meredith said there was “no need for the road.”

“I just know you should pass this resolution,” Meredith said. “Cottonwood maybe needs it. But it’s not going to bring anything to us.”

On June 11 and on June 12, Yavapai County held public forums to solicit public feedback on eight options the county has identified for the connector road.

Of the eight options, two are not recommended by the county, and a third is to not build the road. The other five utilize Beaverhead Flat Road as a connector, with two options also using Coury Drive, two using Old HWY 279 and one using Thousand Trails Road.

Should Yavapai County decide to build one of the roads, the project would be funded in part by a $25 million Better Utilizing Investments to Leverage Development grant for a new bridge over the Verde River.

According to Yavapai County Public Works Director Don Cherry, the county is “hoping to make a decision on moving a preferred alignment forward” in the next month to six weeks.

Garrison also said that the county hasn’t “made our minds up yet” on which option.

“There are very few opportunities to put roads in that move traffic in and out in an orderly manner,” Garrison said.