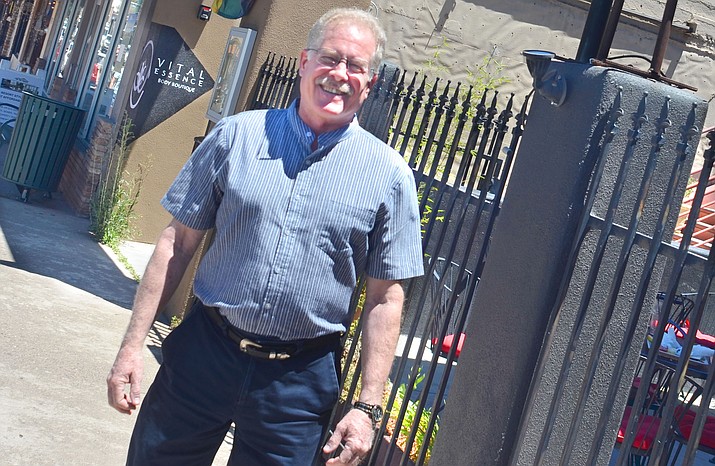 This interview with Economic Development Director Richard Faust was supposed to focus on the half-dozen large vacant buildings in Old Town Cottonwood.

But as economic director, Faust’s job is to show the glass half-full, so he was masterful in making the case that the present condition of Old Town Cottonwood is actually in a sweet spot.

He pointed to 20 years ago when store fronts were closed across Arizona, and Old Town was in a “die-out stage.”

Faust said three major milestones during the last 20 years have made Old Town what it is today.

First, the economic recovery after the 1998-2001 recession, bolstered by development and historical grants, lead an eight-year rebound. And lot of people hung on through the 2008-2012 recession, he added.

Next he credited the popularity of the wine industry in the Verde Valley, which has led to the opening of 24 wine tasting rooms in the valley and six in Old Town since 2005.

Faust said also pointed out that Jurisin recently opened the popular 43--room Tavern Hotel in Old Town, which promotes eco-tourism while partnering with other Verde Valley businesses and predicted this could help contribute to Cottonwood’s next economic milestone.

As an example of this new trend, he pointed to a brand new inn that was just approved by the Cottonwood Planning and Zoning Commsiion last week for Old Town at the Dragonfly Art Store.

There will be three of four units, business space, and it will be a small B&B.

Also, people renting vacation homes for recreation and wine touring in the Verde Valley is becoming more popular in Cottonwood, bringing more people to Old Town, he added.  The future of eco-tourism has great potential, he said. “You’re seeing a lot of the businesses now thrive more”

OK so what about the vacant buildings?

There are at least six large vacant buildings in Old Town that are for sale, or are waiting to be developed.

Even though most of the small stores in Old Town are leased now, three large buildings sit right at the entrance of Old Town. The building are near Bing’s Burger Station at the first “bend” in Old Town and create a visual impact for motorists entering the historic Western downtown area. 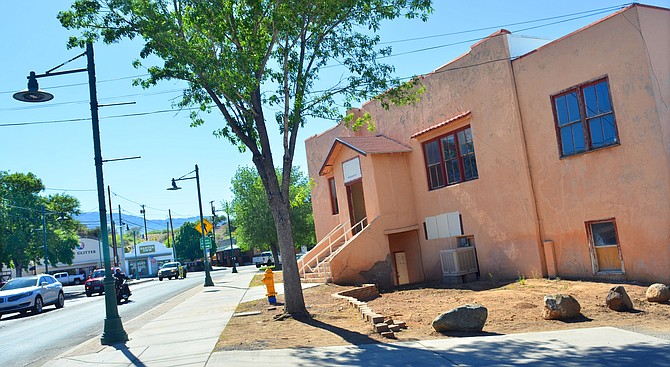 The former Recreation Center building sits at the entrance of Old Town and has been vacant for some time. A developer wants to turn into a microbrew pub. VVN/Vyto Starinskas

Faust said the city is working closely with the owner of a proposed microbrew pub at the “bend” with the owner and hoping construction will begin in July, with an opening in a year.

Even though it’s a cliché’ that the “City’s open for business,” Faust said the microbrew pub is great example of the city working with a Old Town business owner to solve problems and get them opened.

The city put in a water hookup and fire hydrant in front of the microbrew building, he said. The city put lines across the roadway.

P&Z approved plans in December 2018 to turn the former city recreation center and one-time church into a brewpub.

He said the city is trying to be active and engage potential buyers with the owners of the property.

Hands-on owner Jet Foley created a unique bar and restaurant five years ago but closed the doors in January and put the building up for sale, which was once a former 76 gas station and garage.

Car wash next to RIOT

There is a former car wash and building for sale next to the Riot. “There’s going to have to be some revitalization of that building,” he said,

It’s going to take someone to come in and do an office space or another winery, he said. It’s going to have to be converted into something different.

Faust said the old Masonic Temple in Old Town is being call the Galileo project. It will be a wine tasting room, restaurant, shopping area and some grapes will be grown there, too.

“It will be a huge building up there. There will be a lot of opportunity for people to go and spend, not just a couple of hours, but probably three or four hours up there in between having wine with the restaurant and shopping area as well,”

Faust said he has not heard much about the sale of the former Thai Palace, which is just off Main Street in Old Town.

He said it would make another great restaurant or a conversion into another kind of business,

Faust also said he didn’t know what the update was on the former yoga building across from Bocci at the Jail Trail parking lot. The Old Town Mission building is also listed for sale.

Faust said the Hippie Emporium will become a new business in the next couple of months, but he could not say what kind of business at this time. “It’s going to be rented again,” he continued. “So that will be good, at least having someone on that end of the town.”

At the other end of town, right between the proposed microbrewery and the former Masonic Temple project, is the Colt Grill that owner Brenda Clauston opened three years ago.

Friday afternoon, diners ate outside on the Colt deck along Main Street listening to a live musician as Grand Canyon Brewery from Williams set up for a beer promotion event.

Clauston is also the president of the Old Town Association and said things have worked out great for her restaurant in the entrance “bend” of Old Town.

At first most of the pedestrian traffic seemed to be at the north end of town, but their restaurant started migrating people to the southern end. Then Crazy Tony’s opened, the art shop next door also opened, and Art Glitter does well and then Bings was purchased and reopened. “And the community clubhouse being redone has been wonderful,” she said.

“I see a big improvement in the last three years,” Clauston pointed out. “I think we are off and running.”

“Our board is really dedicated in bringing locals back to Old Town again and increasing tourism,” she said. “We’ve done tremendous work.”

“We look at business retention,” Faust said. The wineries in the Cottonwood area have said they need a bottling facility in Cottonwood, so the city has put out a beacon for bottling companies.

The same is true with the need for places to store large quantieies of wine, Faust continued. The solution is a 10,000-foot storage warehouse facility at the Cottonwood Airpark. The coolers in the storage facility will be segmented and set at different temperatures for different wines, he said.

In the end, Faust said the best way the city can help in the marketing of Old Town is to keep current businesses open and successful.

His job is to make sure the glass is always at least half full.