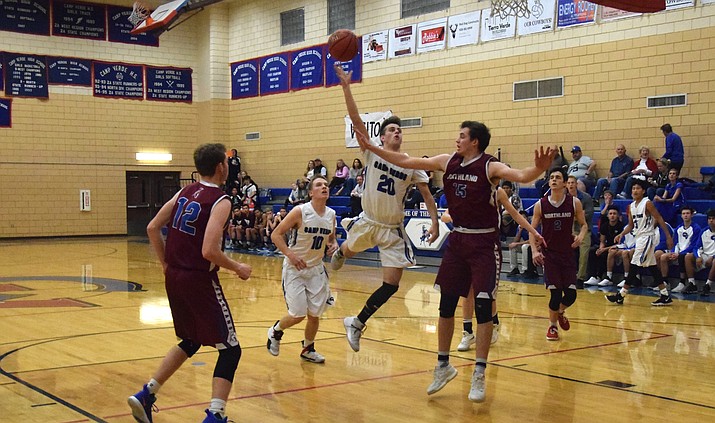 Camp Verde High boys basketball will have wall to wall hoops this weekend.

Camp Verde will host the 2019 Cowboy Summer Shootout this weekend. The tournament will feature games from morning to night and will be played at Camp Verde High School, middle school and the Middle Verde gym.

The Cowboys open with Winslow at 11 a.m. at the high school gym on Friday. Then at noon their second team plays Mingus 2 at noon at the middle school gym.

“It’s a good group of teams,” CV head coach Daniel Wall said. “I think there’s 20 teams total with the JV and the varsity division and I think some really competitive ones. So we’re really excited to host it and to get all those guys down here and the kids are looking forward to competing this weekend, so it should be a lot of fun.” 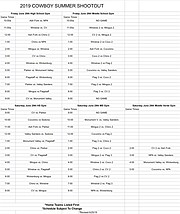 At 8 p.m. on Saturday night the Cowboys play Mingus at 8 p.m.

The tournament concludes summer ball for the Cowboys. Wall said it has gone pretty well for them.

“Been competing well with people, been playing some really tough teams,” Wall said. “A lot of the young guys are getting better, so we’ve been overall very pleased with the summer.”

After their breakout 2018-19 season, Wall said it has not been hard keeping the kids motivated.

“You saw how our season ended, so that’s been a big motivator, is finding a way to get through once playoffs come,” Wall said. “We really need to be able to compete and get after it. And another thing is these kids just love playing; I mean they just love it. It might be one of the groups who I’ve coached who loves basketball the most and so they just after it and have fun together and fun competing, so it’s a really good group to be around.”

Senior to be Jason Collier has impressed.

“He just continues to put work in and get better and improve his game, so he’s really had an excellent summer for us,” Wall said.

“He’s (Salas-Zorrilla) just playing with a lot more confidence,” Wall said. “Another kid that’s stepped up a lot this summer is Devon James, as well as Cristoph Castro, those two kids will be sophomores next year and are just really playing with confidence and sharing the ball well and their defense is improving, so I’ve been very pleased with them. And then the other kid to mention would be Coke. Coke’s been a busy kid this summer because he’s hard to work and play baseball and play hoops as well but he sure competes every time he’s on the floor so we really appreciate his efforts this summer.”