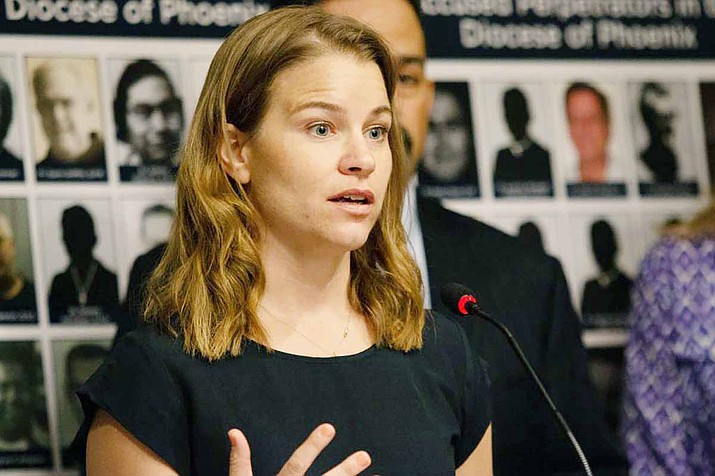 Advocate and abuse survivor Bridie Farrell shared her personal experience during the press conference at the Downtown Hilton. Farrell was only 15 when she was abused by a fellow speed skater who was 32. Grayson Schmidt/Cronkite News

PHOENIX – Attorneys with Jeff Anderson & Associates released a report Wednesday containing the names, photos and information of 109 clergy accused of sexual abuse in the Diocese of Phoenix.

“It is time for transparency, and it is time for disclosure,” said Jeff Anderson, whose law firm advocates for victims of clergy sexual abuse.

“The reason why we are here today and disseminating this information is because there has not been a full accounting by the Catholic diocese in Phoenix of all the names that should have been disclosed by the Catholic bishops, past and present.” 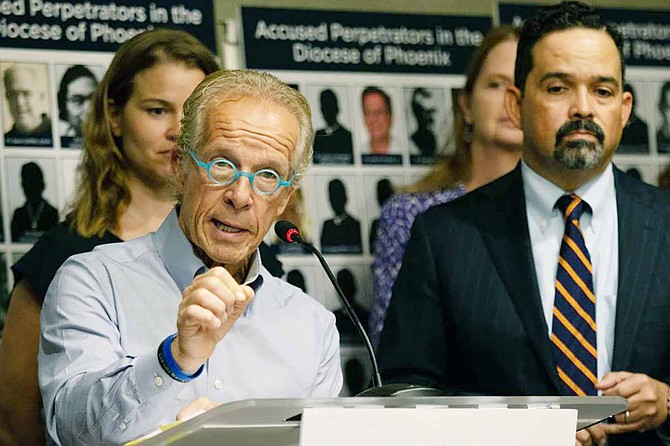 Attorney Jeff Anderson (left) and members of his law firm held a news conference Wednesday to release the names and information of 109 clergy accused of sexual abuse in the Phoenix Diocese. Attorneys, as well as advocates and survivors, addressed the press about the Anderson report. Grayson Schmidt/Cronkite News

The report includes assignment histories and details of accusations. Also included are those who were assigned to or living within the Dioceses of Gallup and Tucson before the formation of the Diocese of Phoenix in 1969.

The law firm’s compendium – the first of its kind in Arizona – includes 40 clergy members who are not on the lists of credibly accused priests that are posted on the websites of the Dioceses of Phoenix, Gallup and Tucson. It also includes information that’s not available through the dioceses, such as charges filed against the priests and their current whereabouts.

According to the report, inquiries with the Diocese of Phoenix began in 2002, when a Maricopa County grand jury launched an investigation relating to sexual misconduct by diocesan personnel.

Such investigations have intensified across the nation over the past year, sparked by the 2018 Pennsylvania grand jury report that led to the conviction of more than 300 Roman Catholic priests in the state and uncovered more than 60 years of coverups by church leaders. 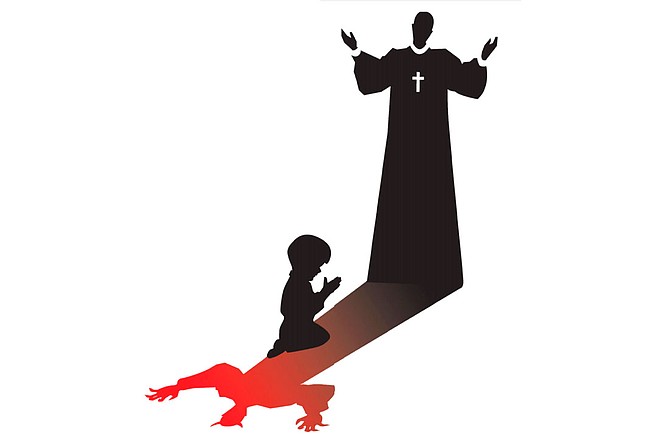 According to the Survivor Network of those Abused by Priests website (snapnetwork.org), 20 states are pursuing active investigations that feature hotlines or online services for reporting clergy-related abuse. Arizona is not one of them.

Arizona passed a law in late May that allows survivors of child sex abuse an additional 10 years to sue their abusers. Previously, survivors had until age 20 to bring charges.

Former speed skater Bridie Farrell was also present during the report’s release, and talked about the bill. Farrell has become an advocate for sexual abuse victims, after she herself was abused as a teenager by a former teammate.

Farrell spoke about the impact of the new law in conjunction with the new report.

“I’ve learned a lot about your state since I’ve been here, including your five C’s. I think you should add a sixth, and that’s compassion,” Farrell said. “We’re going to see a groundswell of strength and courage from Arizona voices who are going to come forward and it’s going to make it safer for everyone.”

Speakers emphasized that the report allowed survivors of abuse in Arizona to access a database so they can do their own analysis. Former Catholic priest Patrick Wall said that, although the report focused on the diocese, it should be seen as a window into institutional responses.

“This is not just about the Catholic Church. This is about institutional response to childhood sexual assault,” Wall said. “You can see how the patterns and practices work.”

According to the Survivor Network of those Abused by Priests website, 20 states are pursuing active investigations that feature hotlines or online services for reporting clergy-related abuse. Arizona is not one of them.

Survivor and network president Tim Lennon said he has contacted the Arizona attorney general by email and in person about starting an investigation in the state, which would include the creation of a dedicated hotline.

“Hotlines are more accessible. There’s less sharing,” Lennon said. “It’s also easy. It relieves some of the responsibility of hiring an attorney.”

The U.S. Conference of Catholic Bishops voted earlier this month to create a national hotline where survivors can report clergy-related sexual abuse. The Rape, Abuse & Incest National Network (RAINN) has featured a confidential national hotline since 1994.

The number is 800-656-HOPE (4673). The process of full disclosure here,” said attorney Jeff Anderson, whose firm advocates for survivors of clergy sexual abuse.

NOT ALONE by RAINN