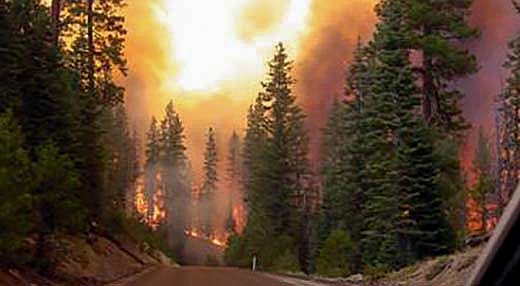 The Woodbury Fire has grown to 123,263 acres. Firefighters have achieved 53% containment as of 7:45 a.m. Thursday. Tonto National Forest photo

TONTO NATIONAL FOREST – Though the Woodbury Fire has grown to 123,263 acres, firefighters have achieved 53% containment as of 7:45 a.m. Thursday.

According to Incident Information System known as InciWeb, 703 personnel are now involved in fighting the wildfire, which began five miles northwest of Superior at about 1:30 p.m. on June 8.

At the fire’s north flank, crews will patrol and monitor fire activity, according to InciWeb, with firing operations conducted if needed.

Aircraft will also be used if needed to reinforce the fire line north of Pinon Mountain, according to InciWeb. Unmanned Aircraft System (UAS) will be used on the north end of the fire to pick up heat signatures along the fire edge.

In east and southeast flanks, crews will be cold trailing lines and mopping up where necessary. The Unmanned Aircraft System was used to pick up heat signatures along the fire edge. Crews will backhaul equipment from the areas around the 500kv lines in those divisions.

The south, southwest and west flanks have been put into patrol and monitor status and resources have been allocated for suppression repair according to Agency Suppression Repair Standards, according to InciWeb. Crews will continue to cold trail the southwest flank between the 650 road and Sawtooth Ridge. Backhaul of equipment and hose is being done. Chippers will be used to disperse vegetation that was cut to improve contingency lines.

Contingent upon continued decrease in fire behavior and threats to values at risk, the Woodbury Fire will be transitioning command to the Central West Arizona Type 3 Incident Management Team.

Transition will occur at 6 a.m. on June 28. Significant demob is occurring in an effort to right size resources and meet the needs of the incoming Type 3 Team.

For more information about the Woodbury Fire, visit inciweb.nwcg.gov/incident/6382 or fs.usda.gov/detail/tonto/news-events/?cid=FSEPRD639892.

According to InciWeb, the fire’s estimated containment date is midnight Monday, July 15.

Personnel used an Unmanned Aircraft System to fly over the eastern border of the fire to scout for hotspots. The UAS detected heat within the fire perimeter and helicopters were ordered for bucket water drops in addition to firefighters building line on the ground. The UAS continues to be used today.

On the northern perimeter, retardant drops were used to assist ground crews near Pinyon Mountain as vegetation continued to burn. The successful operation will be checked today to confirm the fireline is holding.

South of SR 88, firefighters continue to secure fireline where burnout operations were conducted. Fire is still burning inside the fire area along the ridgeline of Fish Creek Canyon and parallel to the Arizona National Scenic Trail. For these reasons, SR 88 remains closed from Tortilla Flat to the SR 188 Junction.

There are still interior pockets of vegetation within the fire perimeter that will continue to burn but do not pose a threat to the firelines. The expected increased winds will make smoke noticeable throughout the week.

Crews resume suppression repair along the southern border where they are repairing dozer lines, chipping downed trees and hauling out debris. The repair is intended to help the area recover quicker and minimize the effects caused by fire operations.

As residents repopulate the Roosevelt area, crews continue to fully secure the northeastern perimeter of the fire. Residents should drive with caution as fire crews continue work along the roadway of the SR188 corridor. Recreation south of Highway 188 is still prohibited with the Forest Closure Order in effect.

Heavy shrub fuels at higher elevations (NE side of fire) will continue to produce limited and isolated areas of active fire behavior.

Some interior unburned islands will likely be retained due to lack of adjacent heat or fuel. Unburned fuel pockets with adjacent heat sources may cause flare up as they consume.

Isolated pockets of unburned fuels will continue to consume between upper and lower slopes.

Overall activity expected to diminish and be more focused on smaller portions in the fire area.