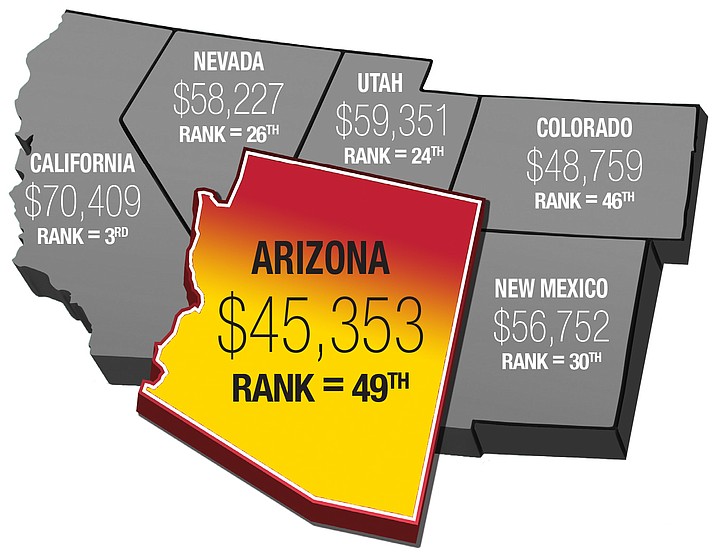 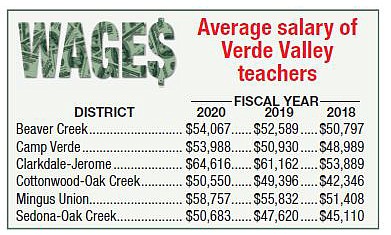 Danny Brown, superintendent at Clarkdale-Jerome School, said, “any increase in school funding is a positive.”

“At Clarkdale-Jerome we pride ourselves in our teacher retention,” Brown said. “It helps to have one of the highest salary schedules in the Verde Valley, but, more importantly, ensuring our teachers receive the support they need in the classroom is critical.”

According to a study released in May by the U.S. Bureau of Labor Statistics (BLS), Arizona is still almost $13,000 behind the national median in paying its educators. 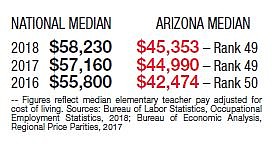 Steve King, superintendent of the Cottonwood-Oak Creek School District, said that the results of the study are “not surprising.”

“While Arizona has put additional monies into its schools in the last three years, it has not offset the years of neglect in the funding of our schools and our children’s future,” King said.

The state’s increase in pay for teachers, said Sedona-Oak Creek Superintendent Dennis Dearden, are “not increases of great enough magnitude that they would alter Arizona’s low education funding status relative to other states.” 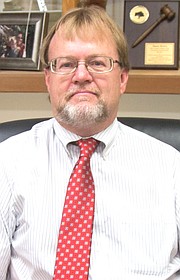 “It helps to have one of the highest salary schedules in the Verde Valley, but, more importantly, ensuring our teachers receive the support they need in the classroom is critical.” Danny Brown, Clarkdale-Jerome School Superintendent 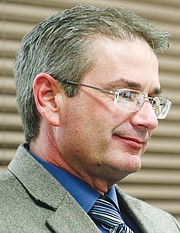 “While Arizona has put additional monies into its schools in the last three years, it has not offset the years of neglect in the funding of our schools and our children’s future,” Steve King, Cottonwood-Oak Creek School District Superintendent

Based on the study, which is comprised of data from January-December 2018, California, Utah, Nevada and New Mexico are all ranked in the top-30 in median teacher pay. Colorado is ranked 46th.

But the state’s efforts to improve teacher pay have had an impact, according to Mike Westcott, who recently was named superintendent at Mingus Union High School.

“Gov. Ducey’s plan is heading into its second year and many districts have been able to provide increases to teacher salaries of 15% or more, with another 5% slated for 2020,” Westcott said.

But the additional money coming from the state, Westcott said, has done “little to improve our ranking, as teacher pay is increasing in other states as well.”

Schools like Mingus Union are incentivizing professional development and coursework with salary advancement for credits earned and advanced degrees, he said.

“It’s also important to emphasize a positive culture for working and learning. We try to develop and maintain this culture by giving teachers and staff a voice and making available whenever possible the ability to contribute and participate in collaborative decision-making,” Westcott said.

Smaller classroom sizes are a priority at Clarkdale-Jerome, Brown said, as well as providing a mentorship program for teachers new to the district.

“We support teachers with relevant professional development that has included in the past, Capturing Kids’ Hearts, mathematics and reading curriculum training and relevant assessment training,” Brown said. “We have great kids and wonderful support from our parents and families.”

Updated salary data was analyzed and adjusted for cost of living by researchers at Arizona State University’s Morrison Institute for Public Policy to inform the Arizona Education Progress Meter, which provides a vision for what the community wants education in our state to look like, including teacher pay that is on par with the national median.

What it costs you to operate a school
Arizona fares well in gender salary comparison study
Mingus track & field claims four state titles
Study puts Arizona among worst places in nation to be a teacher
Good News ... Bad News: Census report shows Arizona no longer worst in nation for education spending; we’ve moved up to No. 47