In Arizona, 54-cents for every $1 budgeted for education actually makes it to the classroom 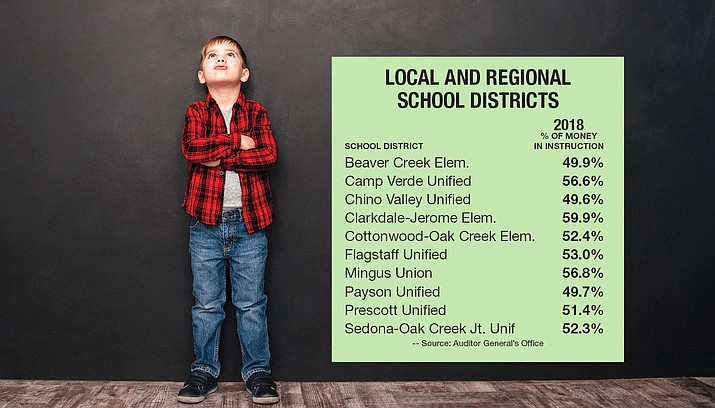 PHOENIX -- With some new money coming into the system, classroom spending in Arizona has increased for the second year in a row.

New figures Friday from the Auditor General’s Office has 54 cents of every education dollar spent this past school year on instruction. That largely includes salaries and benefits for teachers and aides as well as instructional supplies like pencils and paper, instructional software, athletics, band and choir.

That compares with 53.8 cents for the prior year and 53.5 cents the year before that..

Davenport said that the additional dollars did boost the average teacher pay in Arizona from $48,372 to $48,951. And she said that overall school districts employed 101 additional teachers which resulted in a slight reduction in the state’s students per teacher ratio.

Still, she said, a gap remains between Arizona and the rest of the country.

Even with the boost in teacher pay, salaries here remain close to $11,300 below the national avearge.

And there’s something else.

In the most recent year, Arizona’s average class size was 18.5 students per teacher compared to the national average of 16.

The bottom line, she said, is that Arizona spends less than $8,300 per student in operating costs, compared with the national average of more than $11,800, with 54 percent of those Arizona dollars winding up in the classroom in Arizona compared with 60.9 percent of the higher national education spending figure.

But Davenport said this isn’t due to high administration costs, pointing out that these costs in the average Arizona district eat up 10.4 percent of dollars, versus 11.2 percent nationally.

What is making a difference, she said, are other costs.

One of those falls in the category of “plant operations,’’ primarily what districts spend on energy costs.

She said some districts have worked to identify the potential for improved efficiency and cost savings. But, overall, Arizona schools spend 11.9 percent of their budgets on plant operations, versus 9.2 percent for the rest of the country.

Arizona on average also spends more on food service, transportation and instructional support, that last category for things like salaries for curriculum directors.

The real gap, however, is in the category of student support, everything from attendance clerks and social workers to counselors, nurses, audiologists and speech pathologists.

Davenport said some of that could be due to the number of school districts serving a large percentage of students living in poverty or those with special needs, all of whom need additional services.

She said, though, there are things that districts can do to cut down on non-classroom expenses.

One thing Davenport said her auditors identified are districts that build new schools when they already had low-capacity usage rates at existing facilities. There also were district had built new schools or added on to existing one in anticipation of enrollment growth that did not materialize.

“Although decisions to close schools can be difficult and painful, these decisions are important because school district funding is based primarily on the number of students enrolled, and not at all on the amount of square footage maintained.

And Davenport said the record shows that there are things that can be done to cut fixed costs.

For example, she said, the districts her auditors found as being more efficient do things like monitor food prices and maximize the use of commodities provided by the U.S. Department of Agriculture.

She also said they limit overtime and unproductive time by having employees perform other duties. And Davenport said the most efficient districts plan bus routes to ensure, where possible, the buses are filled to at least 75 percent of capacity.

At the other end of the spectrum, she said, the less-efficient districts have costly benefit packages and higher noninstructional staffing levels, spend more on meals and conference travel for employees and governing board members, and lack preventative maintenance plans to maintain buildings and buses.